The clinical signs associated with trace element deficiency in sheep are often insidious in onset and usually present as poorly grown lambs during late summer/early autumn. There is considerable interplay between parasitic gastroenteritis (PGE) and trace element deficiency states such that it is important for the farmer and veterinary practitioner to consider and deal with both problems. 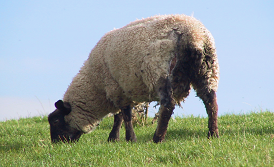 Cobalt has an important biological role as a constituent of vitamin B12 which is manufactured by micro-organisms in the first stomach (rumen). Cobalt deficiency (pine) occurs where there are low soil cobalt concentrations which may be further complicated by PGE which causes diarrhoea thereby interfering with the absorption of vitamin B12. 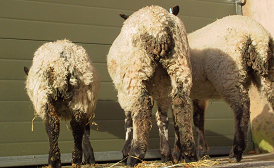 Clinical signs of cobalt deficiency are most commonly observed in weaned lambs at pasture during late summer/autumn. Signs include lethargy, reduced appetite, poor quality wool with an open fleece, small size and poor body condition despite adequate nutrition. There may be tear staining of the cheeks, and pale mucous membranes (eyes) develop after several months. Cobalt-deficient sheep may fail to respond well to vaccinations and be more susceptible to clostridial diseases (for example pulpy kidney) and pasteurellosis (pneumonia).

Cobalt deficiency is much less common in adults but is reported to cause reduced fertility and poor mothering ability but these signs may be more related to generalised low body condition scores. 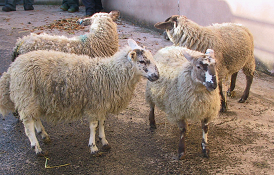 There is considerable interaction between chronic parasitism and trace element deficiency states such that it may prove difficult to ascertain which is the more important condition. Diagnosis is often compounded by the fact lambs may have been recently treated with an anthelminitic and moved onto better pasture immediately before veterinary examination. 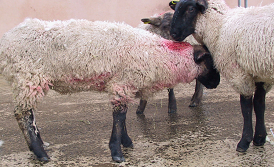 The main differential diagnoses for cobalt pine your veterinary practitioner will consider include: 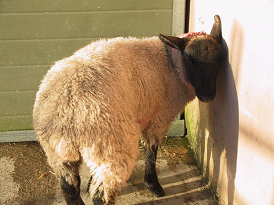 Diagnosis is based upon clinical signs in areas with known cobalt-deficient soils supported by specific diagnostic tests undertaken by the farmer's veterinary surgeon including low plasma and/or liver vitamin B12 concentrations. As a general guide, a positive growth response to supplementation is expected if the mean plasma vitamin B12 concentration is < 500pg/ml, and is likely to be significant where it had been below 250pg/ml. A minimum of 10 blood samples is recommended to determine the mean plasma vitamin B12 concentration but this number is likely to be limited by cost considerations. These blood samples must be collected as soon as possible after the sheep have been gathered as values increase significantly within hours of confinement. 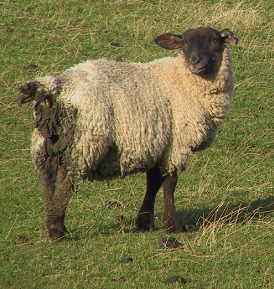 Fig 6: Parasitic gastro-enteritis is a very common cause of poor lamb growth

Oral cobalt supplementation is very cheap indeed and, where appropriate, can be added to certain anthelmintic drenches. Monthly dosing lambs from around three months-old with cobalt drenches should supply sufficient cobalt to growing lambs in most situations.

Cobalt containing boluses, which lodge in the reticulum (second stomach), provide a continuous supply of cobalt but are expensive in those lambs which require supplementation for only two to three months.

Soluble glass boluses containing cobalt, selenium and copper are an expensive means of supplying cobalt and are only indicated in situations where all deficiency conditions are considered to exert a negative influence on health. 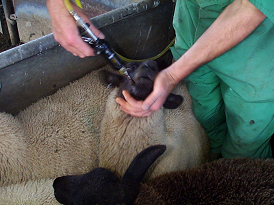 Fig 7: Monthly dosing lambs from around three month-old with cobalt drenches should supply sufficient cobalt to growing lambs in most situations.

Oral cobalt supplementation costs less than 1 penny per 25 kg lamb. Production losses from poor growth and delays to marketing may cost £10-£15 per lamb. 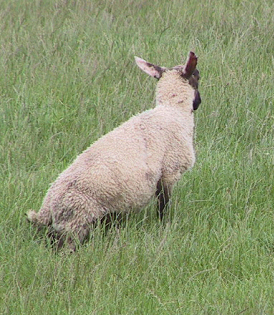 Copper deficiency is common when sheep graze pastures low in copper but more often high in iron, molybdenum and sulphur. Where two or more of these three elements exist together on a farm, in quite 'normal' concentrations, they will act synergistically to bind out copper from a diet. The clinical manifestation of copper deficiency varies worldwide with swayback more common in the UK, poor wool quality and anaemia in Australia, and poor bone mineralization in New Zealand. 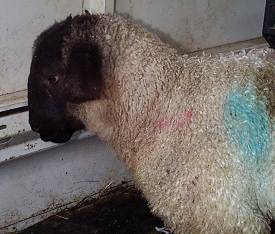 Fig 9: Copper poisoning - timing and type of copper supplementation must be specified in the farm's veterinary flock plan

Copper deficiency in ewes during mid-pregnancy may lead to swayback in lambs.

In growing lambs copper deficiency may result in a poor fleece without its natural "crimp" which has been described as "steely wool". Poor growth, anaemia, and increased susceptibility to bacterial infections has been reported but is much less common in the UK.

Swayback is provisionally diagnosed by the veterinary practitioner on clinical examination and confirmed following histopathological examination of the central nervous system.

Copper deficiency is most reliably diagnosed in growing lambs based upon a dose/response study (see above under cobalt supplementation noting veterinary advice is essential before giving copper supplements).

Plasma samples are most commonly submitted for laboratory analysis by the veterinary practitioner with concentrations below 9.4 μmol/L indicating depletion of liver reserves. It is reported that lamb growth rates are not adversely affected until plasma concentrations fall below 3 μmol/L.

Prevention of copper deficiency in growing lambs is much more important than treatment because irreversible changes have often taken place in the fleece, and full compensatory growth may not result after supplementation. Furthermore, treatment of swayback is hopeless and emphasis must be placed upon preventive measures.

While copper deficiency is often a perennial problem on certain farms, farmers must always be made aware of the risks of copper toxicity. Therefore timing and type of copper supplementation must be specified in the farm's veterinary flock plan with specific notes made regarding no other source of extra copper. Sheep must not be given a copper supplement prior to, or during, housing. Toxicity could result from a number of sources including using more than one method of copper supplementation, and use of feeds with high copper content.

Copper is usually given by injection as copper heptonate. Certain copper injections are irritant and may cause a localised reaction. Care must be exercised that the injection is given correctly because abscessation, and in some cases tracking of infection to the spinal canal, have been observed after incorrect injection technique

Supplementation with copper oxide needles can be administered orally in a gelatin capsule. Sheep should not be re-treated for 12 months unless signs of copper deficiency recur.

Appropriate supplementation of the ewe during mid-gestation will prevent the development of swayback in her newborn progeny. 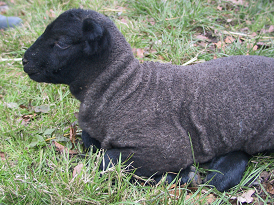 White muscle disease occurs in the UK with recognised risk factors such as feeding home grown cereals and root crops, and incorrectly mineralised rations; however the disease prevalence is generally low. Selenium deficiency occurs in soils of certain geographic areas world-wide leading to pasture/crop deficiency. Vitamin E concentrations are high in green crops but fall rapidly under drought conditions. Certain root crops are known to be low in both selenium and vitamin E. Feeding grain treated with propionic acid may increase the risk of white muscle disease.

In the UK, white muscle disease typically affects rapidly-growing two to six week-old lambs; often ram lambs of meat breeds such as the Suffolk and Texel. There is sudden onset stiffness with lambs reluctant to move such that they are easily caught. After one or two days, affected lambs are unable to rise.

Selenium-responsive poor growth in lambs has been reported in certain geographic areas of Australia and New Zealand where dramatic improvements have resulted after supplementation. Improved lamb growth rates after selenium supplementation are less commonly reported in the UK but will depend upon soil type and localised problems may exist.

Early embryonic loss/failure to implant after mating has been attributed to selenium deficiency. In ewes an increased lamb crop with fewer barren ewes has been reported after selenium supplementation before the mating period but these responses were highly variable between flocks.

The main differential diagnosis for stiffness leading to recumbency in lambs less than two weeks-old is bacterial infection of a joint in the neck and it is very important that this problem is investigated by a veterinary practitioner.

There are many causes of poor growth in groups of growing lambs including cobalt deficiency, poor pasture management, and parasitic gastro-enteritis. Likewise there are many causes of returns to service including infertile rams (ewes returning at 17 day intervals), toxoplasmosis and Border disease (ewes returning at intervals greater than 17 days).

A provisional diagnosis of white muscle disease in young lambs is based upon clinical signs in rapidly growing healthy lambs with the presence of some of the risk factors listed above. Muscle enzyme concentrations will be measured by the veterinary practitioner. Most laboratories determine glutathione peroxidase as the indicator of selenium status.

Intramuscular or subcutaneous injection of young lambs suffering from white muscle disease with 0.75 to 1.5 mg selenium as potassium selenate and 34 to 68 mg vitamin E (dl a-tocopherol acetate) results in return to full mobility within two to three days.

A range of methods can be used to supply selenium and/or vitamin E including in-feed medication, periodic drenching, depot injection, and intraruminal glass bolus or pellet. It is generally accepted that free-access licks/minerals are unreliable because of highly variable intakes.

As white muscle disease is seen most commonly in young lambs, prevention can be achieved by supplementation of the dam's ration during late gestation or injection of all newborn lambs with a selenium and vitamin E preparation.

Supplementation of growing lambs is best achieved by drenching, often in combination with anthelmintic treatment. Such supplementation provides adequate selenium for one to three months. Great care must be exercised when formulating a supplementation programme because toxicity can occur following over-dosage especially in young lambs. The preparation must be shaken vigorously prior to use to ensure thorough mixing. In breeding sheep, selenium supplementation via drenching is given one to two months before the start of the breeding season. It is essential that veterinary advice is obtained before supplementation.

Intraruminal glass boluses are a very expensive means of supplementing with selenium but is a useful method where other trace element deficiency states occur concurrently.

In the absence of a split flock trial, it is very difficult to calculate the cost benefit of selenium supplementation with respect to reproductive wastage. If doubts exist regarding poor reproductive performance, ewes should be drenched at regular intervals prior to mating.