Eye disease in sheep can be extremely painful or cause permanent blindness. It can be a significant cause of reduced feeding and condition loss. There are a variety of eye conditions which affect sheep in the UK; diagnosis is important in order to ensure the correct treatment is given.

Periorbital eczema is a common skin condition often resulting when sheep have too little space at feed troughs. Trauma to skin allows entry of Staphylococcus aureus bacteria causing severe local infection. Affected sheep have severely swollen eyelids which block vision in that eye. Ewes with both eyes affected are blind. When the skin heals there is sharply demarcated hair loss extending to 2 to 3 cm around their eyes.

Ewes with impaired vision in both eyes should be housed to ensure adequate feeding and prevent death by misadventure. Rapid improvement is usually seen following injection of antibiotics e.g. procaine penicillin.

Periorbital eczema can be prevented by appropriate space requirements at the troughs (45cm per sheep) or feeding directly from clean pasture using a “snacker” to distribute the feed.

Pink eye or snow blindness as it may be colloquially named  is a bacterial infection often associated with high winds and driving snow during the winter. Large numbers of sheep can be affected during these weather conditions. It also spreads rapidly when animals are close together in housing or when there is competition at feed troughs or hay racks. Infection can be introduced with bought-in animals if they are not quarantined before mixing. 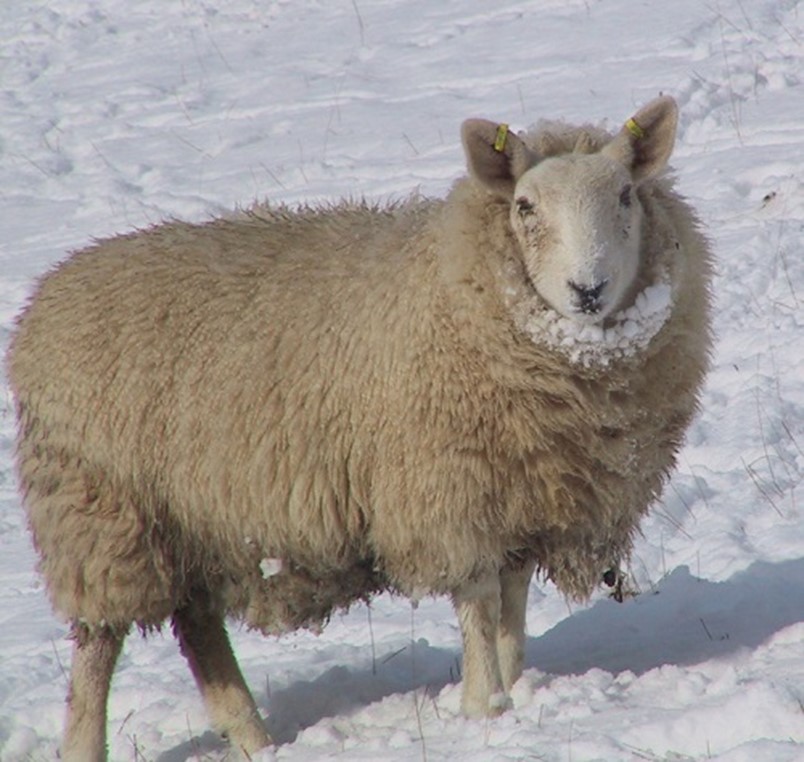 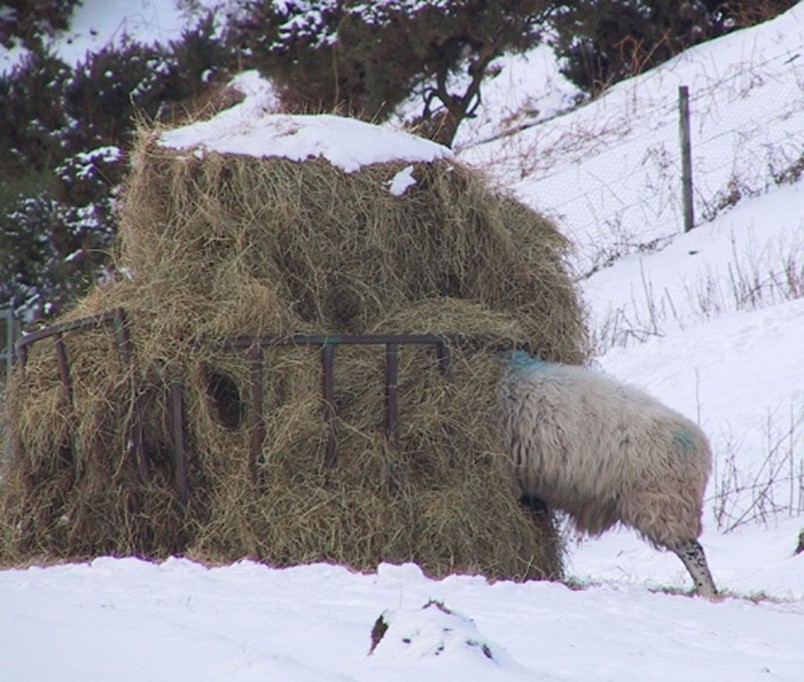 Figure 2: Competition and trauma at feed troughs and hay racks may increase the rate of spread.

The condition can affect one or both eyes. On closer examination of the affected eye(s) there is reddening of the conjunctiva and forced closure of the eyelids when sheep are exposed to bright sunlight. More advanced cases show cloudiness of the surface of the eye and sometimes severe ulceration of the eye surface. 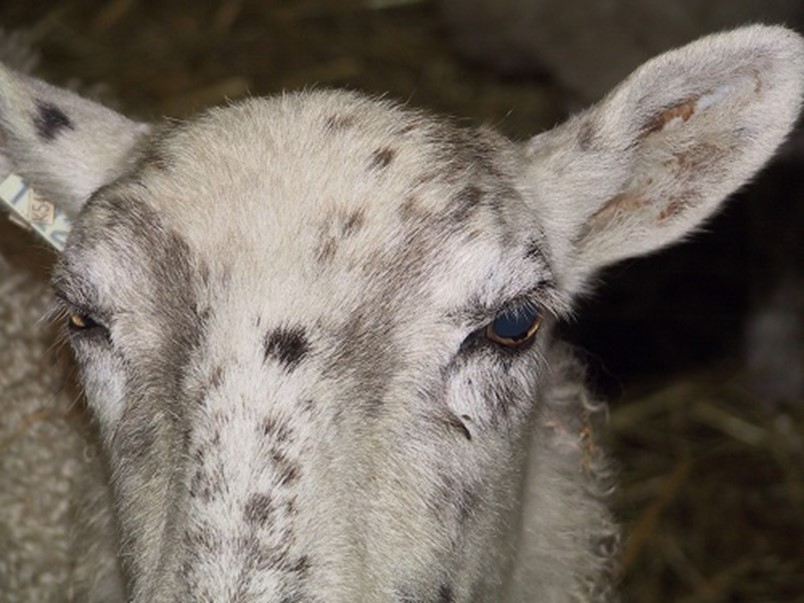 Figure 3: Early stages of pink eye affecting the sheep's right eye – note the eye is partially closed due to discomfort. 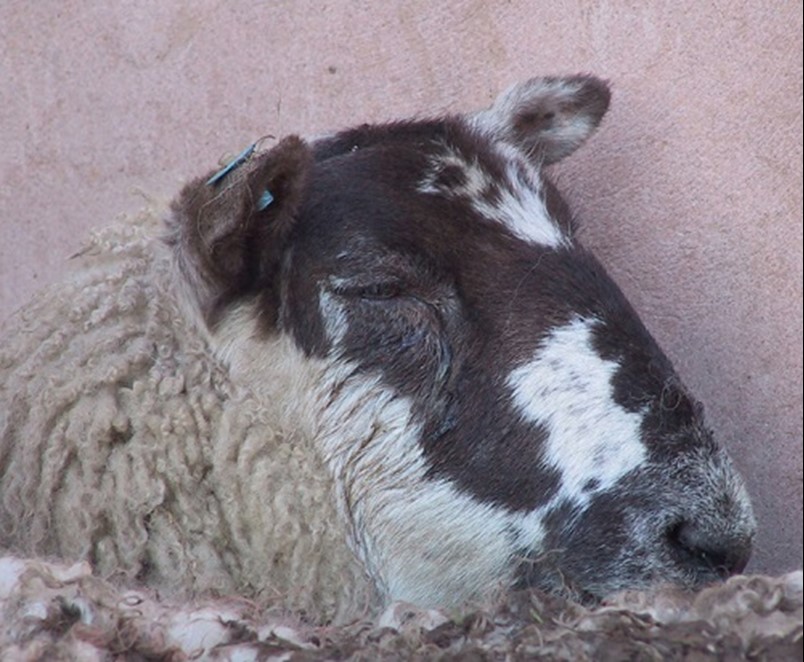 Figure 4: Forced closure of the eyelids and tear-staining of the face. 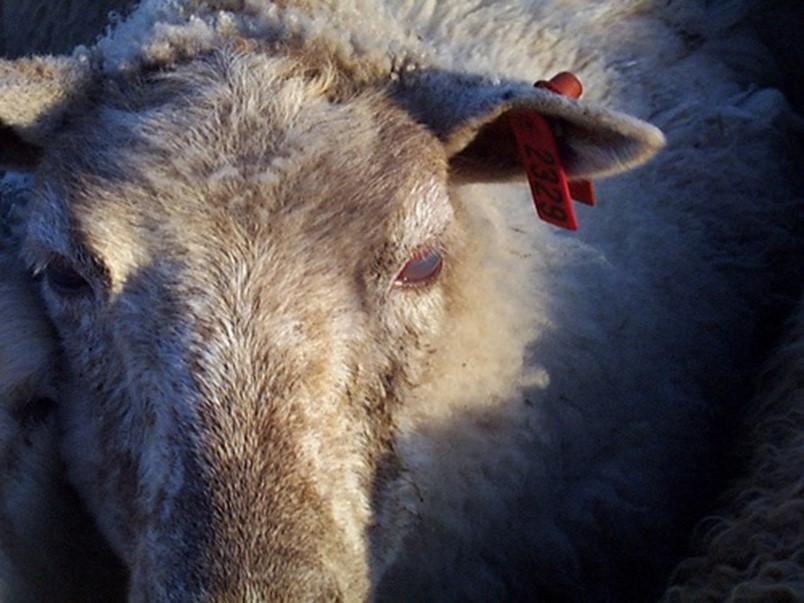 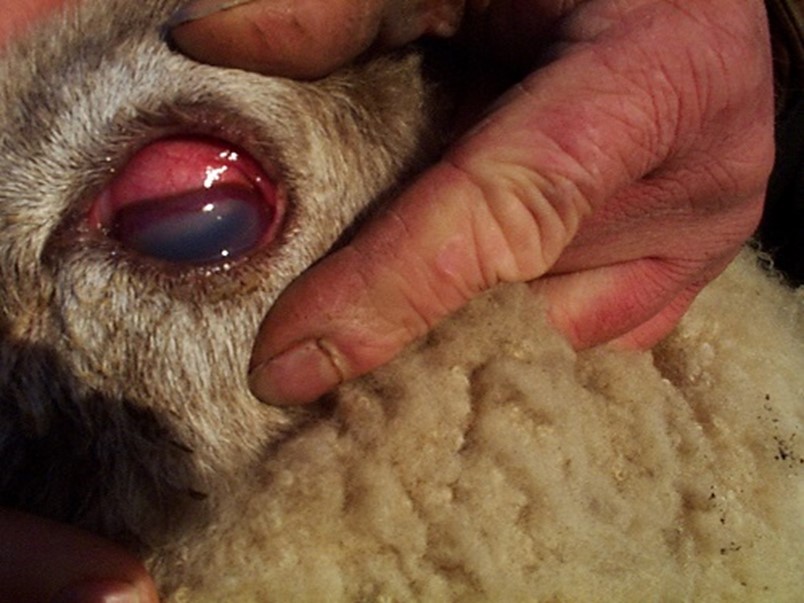 Figure 6: Marked conjunctivitis - the eye looks red instead of its normal white colour. 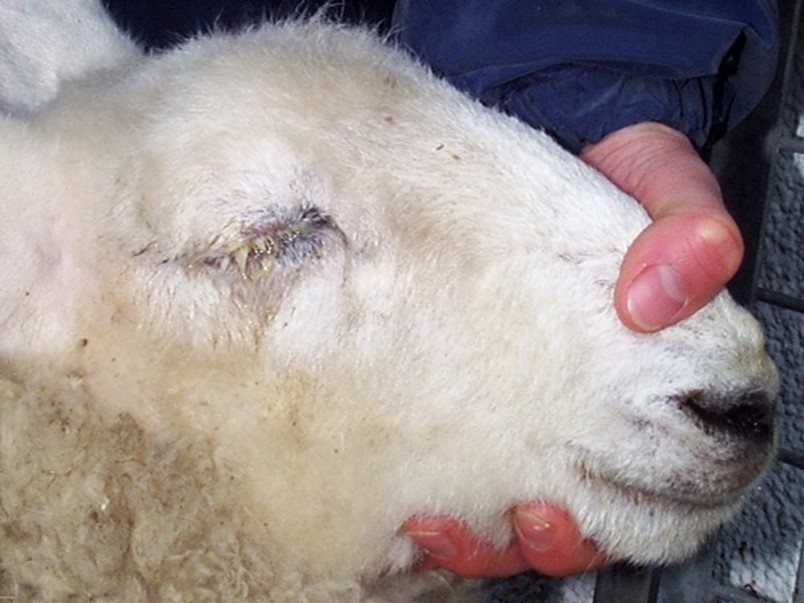 Figure 7: In severe cases there is a pussy white or yellow discharge.In severe cases, ulceration of the surface of the eye may progress to rupture but this is uncommon. During late pregnancy, twin lamb disease may result in ewes carrying multiple lambs because of blindness and inability to find enough food. Sheep may also die from misadventure e.g. falling into ditches or becoming stuck in fencing if the condition causes temporary blindness. 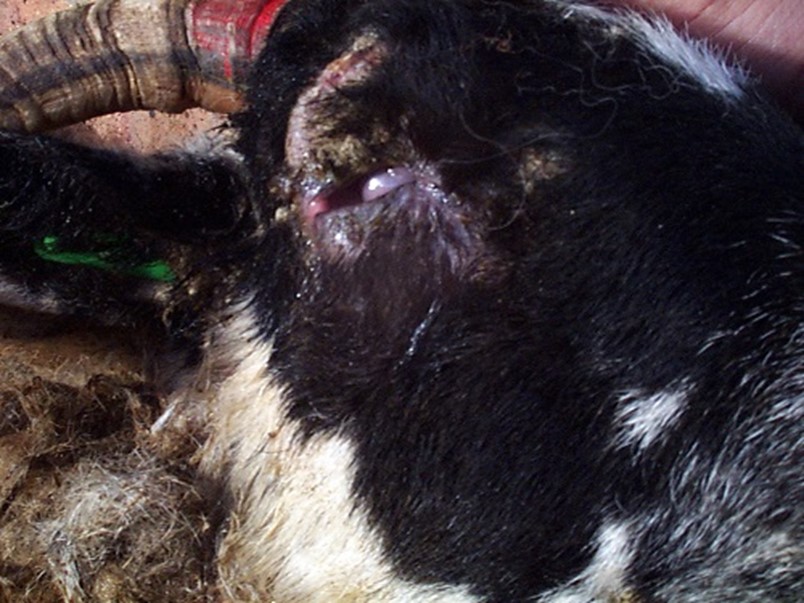 Any animals showing signs of infection (partial closure of the eyelids, tear staining of the face) should be treated. Affected sheep should be housed with ready access to food and water to prevent starvation and metabolic diseases; a single injection of long-acting oxytetracycline is a very effective treatment. Application of antibiotics directly into the eye may also be used, but this cannot always be accomplished every day for 3-4 days under farm conditions. Immunity following infection is poor, and the condition may recur. 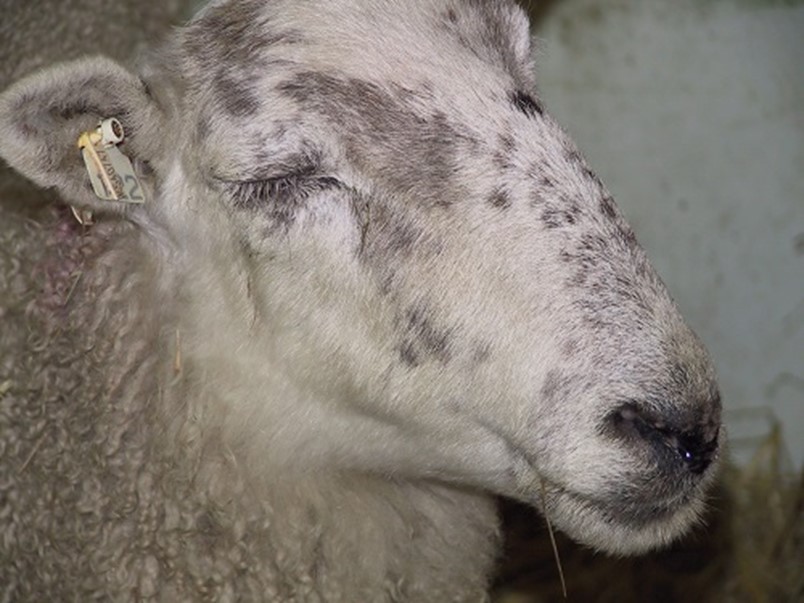 Figure 9: This heavily pregnant ewe has been penned with other affected sheep to reduce competition at feeding times.

Provision of shelter from storms on hill/mountain pastures reduces the risk of infection significantly. Providing adequate trough space and feeding concentrates on the ground may limit the spread of infection throughout the group. Outbreaks of pink eye may occur after the introduction of purchased stock therefore, whenever possible, all new stock should be managed separately as one group away from the main flock to ensure there are no signs of infection before mixing.

Anterior uveitis, also referred to as ovine iritis, is associated with conjunctival infection with Listeria bacteria  (Listeria monocytogenes). It is seen in sheep of all ages and usually associated with being fed on big bale silage.

The initial presenting signs are excessive tear production, forced closure of the eyelids, and aversion to light affecting one or both eyes. Within two to three days, the surface of the eye develops a bluish-white opacity. Healing of the eye takes some weeks without treatment. 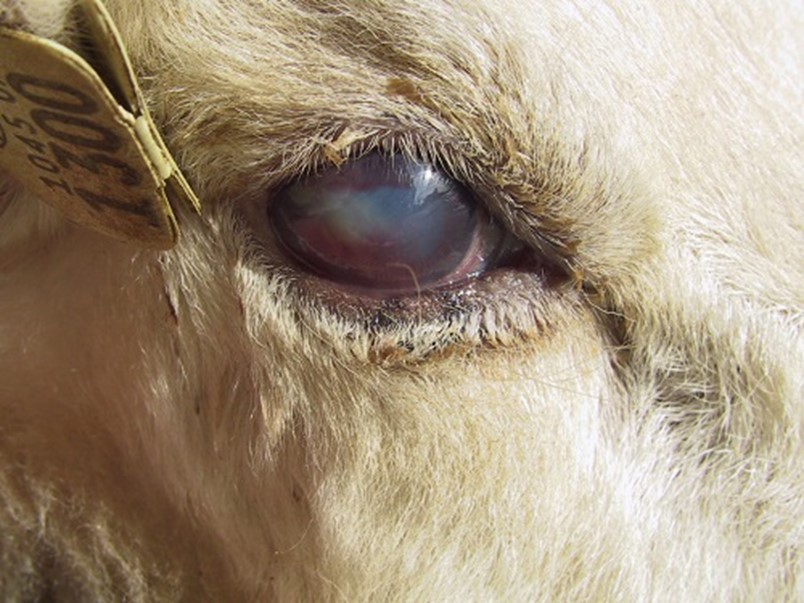 Figure 10: Early uveitis – note the slight cloudiness of the surface of the eye. 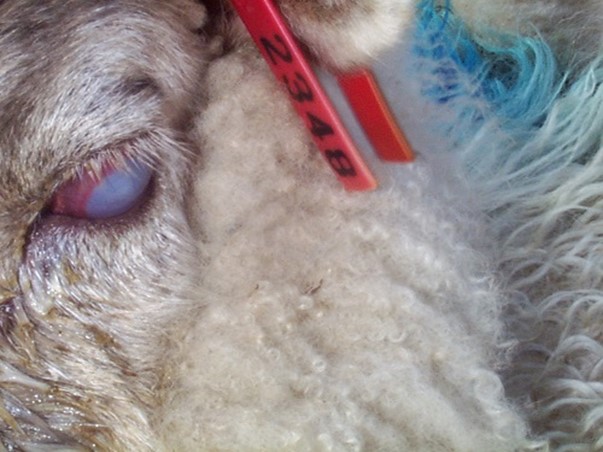 Figure 11: The surface (cornea) of the eye has become blue and opaque leaving the sheep temporarily blind in this eye.

Seek veterinary advice on treatment which will include antibiotic and anti-inflammatory treatment. 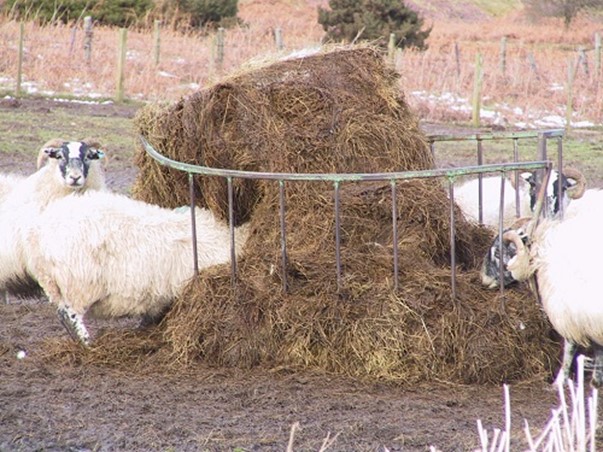 To produce low risk silage for sheep try to ensure minimal soil contamination of the forage. An indication of likely soil content is possible from the silage analysis of ash content. Pay attention to detail when baling and wrapping to ensure appropriate fermentation conditions limit growth of listeria bacteria. Try to minimise exposure to air through puncturing or bird attacks and at feed out. Making bales or clamp silage with a shorter chop length for sheep makes it easier for them to feed without having to bury their heads in the long fibres

Infection with Listeria can cause other problems in sheep such as abortion. Always assess forage quality both for feed value and preservation. Poor quality or mouldy silage should be discarded. If iritis is diagnosed in a group of sheep, removal of the remains of the bale of silage may limit new infections.

Entropion (in-turned eyelid) is a common hereditary problem of many sheep breeds and their cross-bred offspring.

Inversion of the lower eyelid is either present at birth or appears soon afterwards. Discharge from the affected eye(s) quickly becomes pussy. Direct contact between the eyelashes and the surface of the eye causes severe irritation and ulceration in more advanced cases with consequent blindness. The condition frequently affects both eyes. 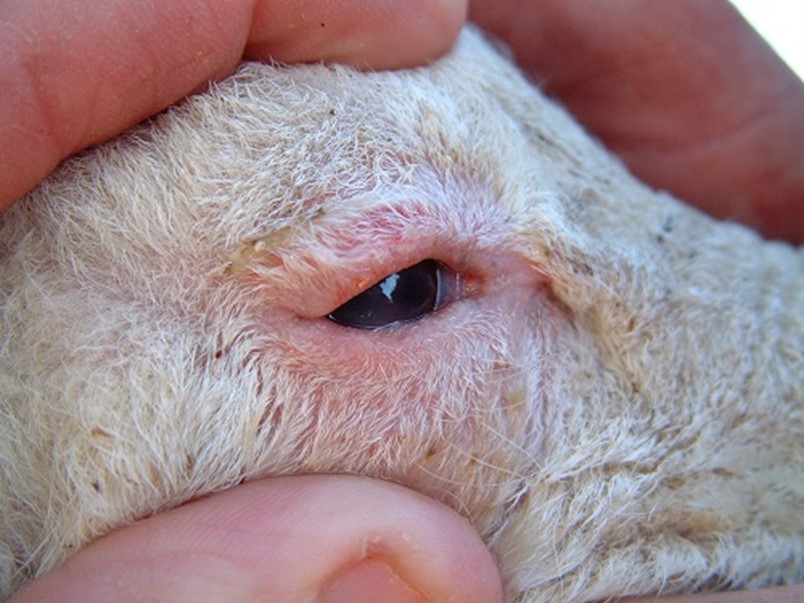 In simple cases the lower eyelid is everted by rolling down the skin immediately below the lower eyelid. Topical antibiotic in an ophthalmic ointment is then applied to the eye to control potential secondary bacterial infection. In addition, this lubricates movement of the lower eyelid thereby reducing the likelihood of inversion.

Alternatively, thin metal clips which are placed at a right angle to the eyelids, and closed using fine pliers (Eales clips), can also be used to evert the lower eyelid. These clips have the advantage that they can be inserted quickly by one person.

Surgical excision of an elliptical strip of skin and drawing the cut edges together with sutures can be used to evert the lower eyelid but is rarely necessary.

Entropion is managed by regular inspection of all newborn lambs to ensure that the lower eyelids are normally everted.

The genetic component of entropion should be carefully investigated; when the condition can be attributed to certain ram(s) they should not be retained or sold for breeding.