Ringwomb (incomplete dilation of the cervix)

Ringwomb is an incompletely dilated cervix more than six hours after foetal membranes first appear at the vulva. Typically the entrance to the womb is only 3 to 5 cm in diameter allowing passage of only two or three fingers.

The number of cases of ringwomb in a flock varies between farms and between years. The cause of the problem is unknown. Other causes of dystocia may be mis-diagnosed as ringwomb because intervention occurs before the first stage of labour is finished and before the cervix has had time to dilate naturally. If the onset of first stage labour was missed (e.g. in extensive outdoor lambing systems) then it is difficult to correctly identify how much time has elapsed and whether the ewe requires intervention or simply more time.

Various smooth muscle relaxants have been used for ringwomb in sheep but there is little evidence they are effective. Some vets advocate the use of calcium in these cases, although again the evidence for this is limited. Gentle manipulation of the cervix with a clean, gloved hand may encourage dilation. However, if no progress has been made after 10 minutes, continued manual interference can contaminate the lamb, vagina and uterus, and damage the tissues. This increases the risk of infection if the lamb is delivered by a subsequent caesarean operation.

If manipulation of the cervix is unsuccessful the only way to retrieve the lamb(s) is by caesarean section. Seek veterinary assistance immediately. Manual interference with dirty ungloved hands significantly increases the risk of damage to the tissues of the reproductive tract, and the chance of uterine infection (metritis) after lambing.

Head and only one front leg presented (front leg back) 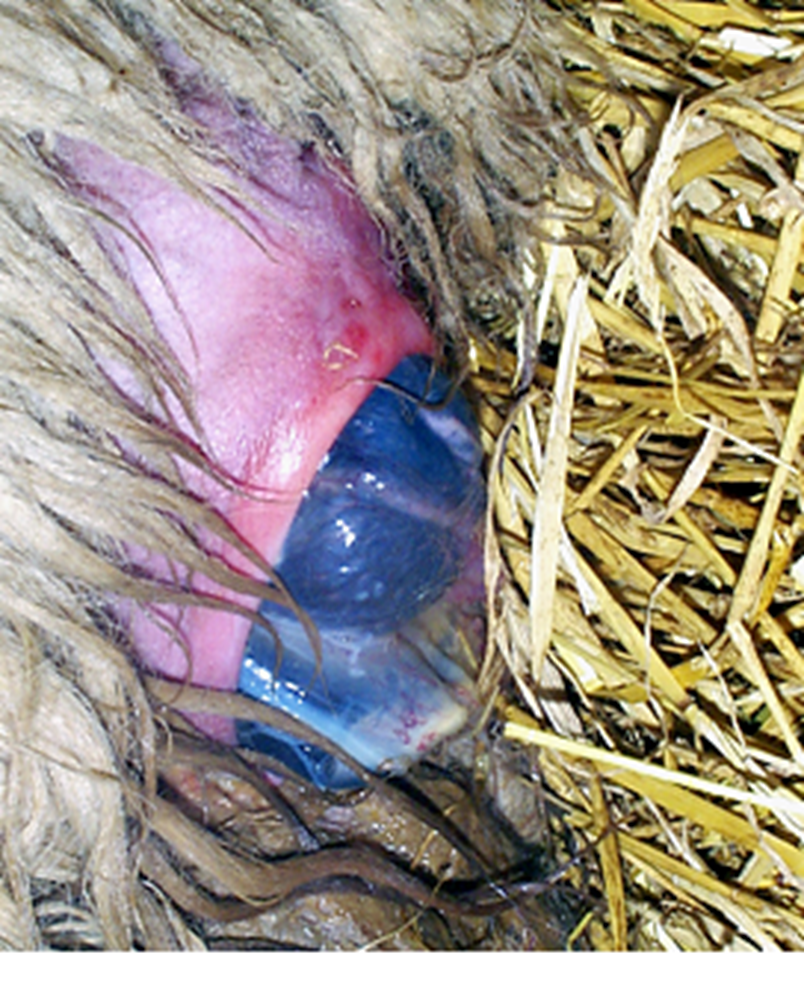 Figure  1: Early detection of a leg back is much easier to correct because the lamb's head is still within the maternal pelvis.

To correct this malpresentation, the retained front leg lying alongside the lamb's chest should be brought forward before any traction is applied to the lamb. This involves pushing the lamb's head back within the ewe's pelvis, flexing the shoulder, elbow, and knee joints of the lamb's retained leg then carefully extending the fetlock and elbow joints in that order which presents the foot at the pelvic inlet. Gentle traction applied to both forelegs should result in delivery of the lamb within 30 to 60 seconds.

If the lamb is small (a twin or triplet), or the ewe is particularly large, it may be possible to deliver the lamb by applying gentle traction to the single leg and head whilst twisting the lamb 90o so that the other shoulder is able to pop through the pelvis without any other manipulation. This manoeuvre is not always successful, and care must be taken not to pull too hard resulting in injury to the lamb. 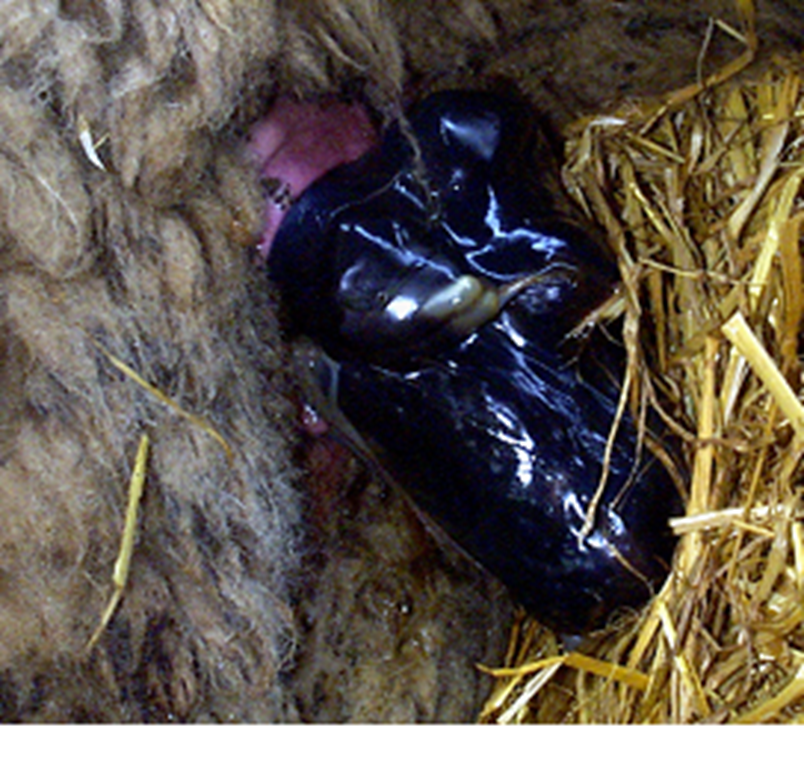 Fig 2: Leg back (early intervention) - the retained (left) front leg lies alongside the lamb's chest and must be brought forward before any traction is applied to the lamb. 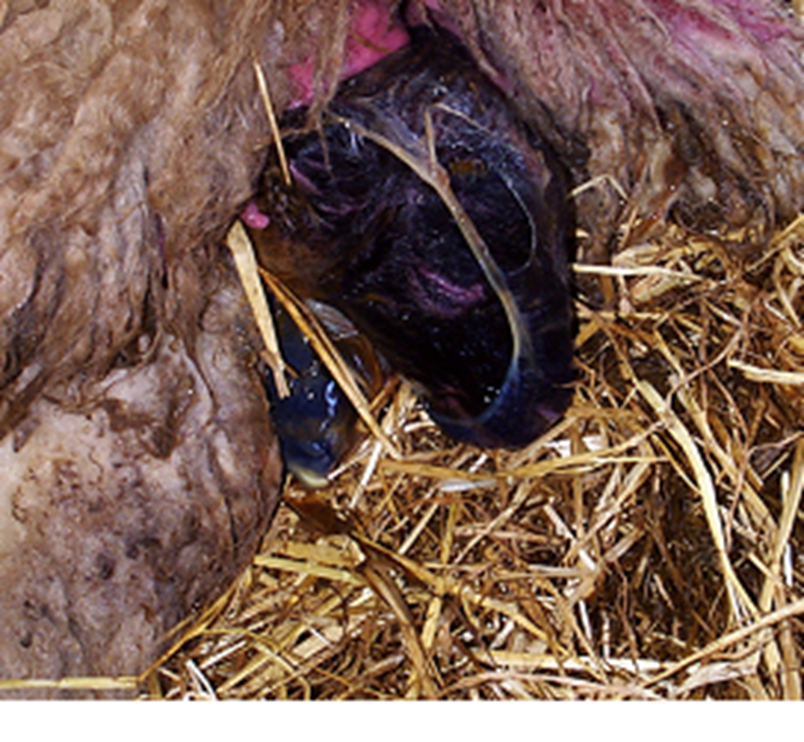 Figure 3: Right leg back (late intervention) - the lamb is dry and its head is beginning to swell. 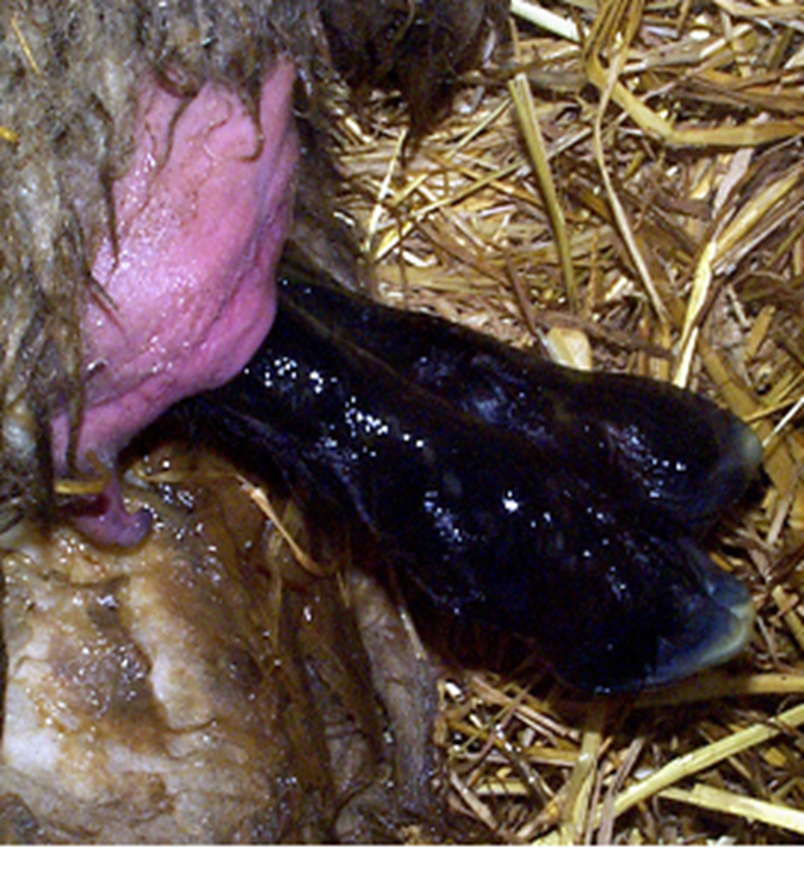 Fig 4: The lamb's head has been well lubricated and pushed back into the ewe's posterior reproductive tract using steady pressure to allow the retained leg to be brought forward.

The head is presented through the vulva but both forelegs are retained alongside the chest. 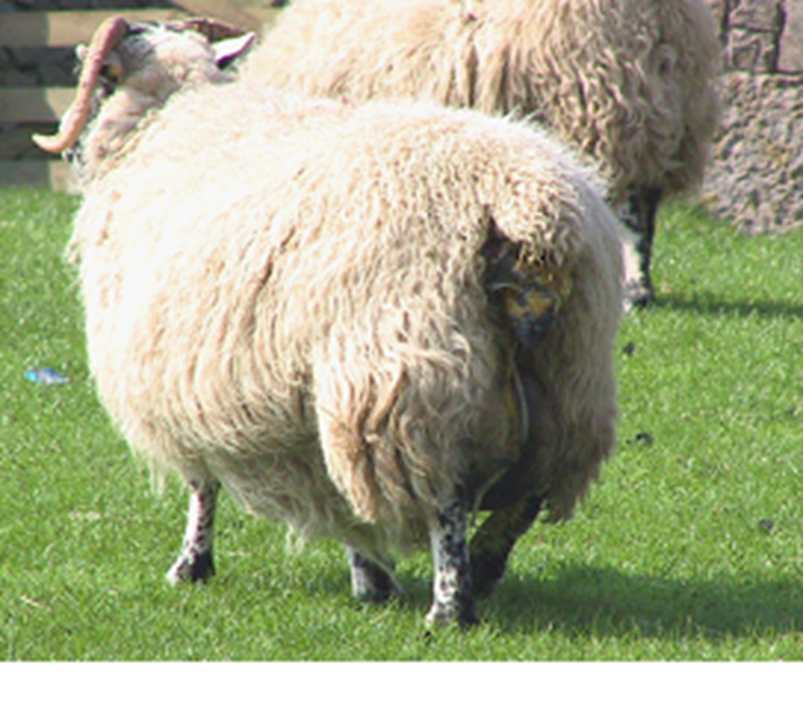 Figure 5: A hung lamb can easily be missed on casual inspection of the lambing group. 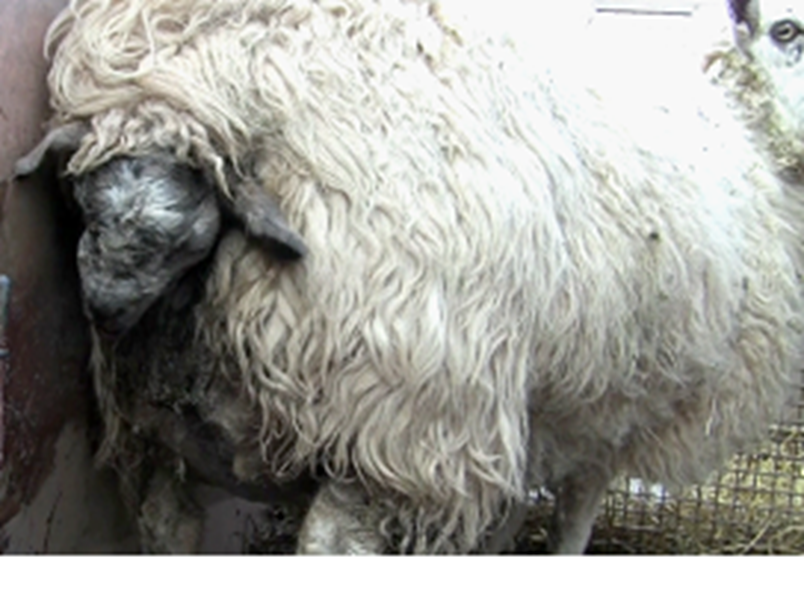 Figure 6: The head of the hung lamb will begin to swell rapidly if not detected and corrected quickly.

Correction of this presentation involves gentle repulsion of the lamb's head into the vagina using plenty of obstetrical lubricant. The shoulder, elbow, knee and fetlock joints of one foreleg are flexed in that order, and then carefully extended in the reverse order which presents the foot at the pelvic inlet. The process is then repeated for the second leg, before gentle traction on both legs results in delivery of the lamb. If the lamb is dead, the head can be removed instead of repelled to allow manipulation of the front legs.

Repulsion of the lamb's head is greatly facilitated by an epidural injection by a veterinary surgeon which blocks the local sensation and reduces the reflex abdominal contractions of the ewe. If the lambs head will not go back far enough to enable the front legs to be reached then veterinary advice should be sought.

The lamb's head and tongue may remain swollen for a few hours. Stomach tube these lambs to ensure they receive enough colostrum within the first two hours of life.

Ewes who have stopped straining after two or more hours should be examined. Reasons to stop straining include fatigue, a backwards or breech lamb or simultaneous presentation of two lambs. Ewes who are continually disturbed during second stage labour may also stop straining.

Lambs born after prolonged second stage labour may be covered in meconium (the first faeces) and appear yellow, green or brown in colour at birth. This is an indication of foetal distress before birth. This is reduced by ensuring ewes are monitored regularly and interventions are carried out in a timely fashion.

The first stage of labour proceeds normally in these cases but there is much reduced straining during second stage labour because the lamb does not become fully engaged within the ewe's pelvis to stimulate the powerful reflex abdominal contractions. These ewes are usually noticed and examined because there has been no progress in several hours. Digital examination of the vagina reveals the lamb's hooves facing the roof of the vagina (not the floor) and the hocks can be felt by progressing forward. 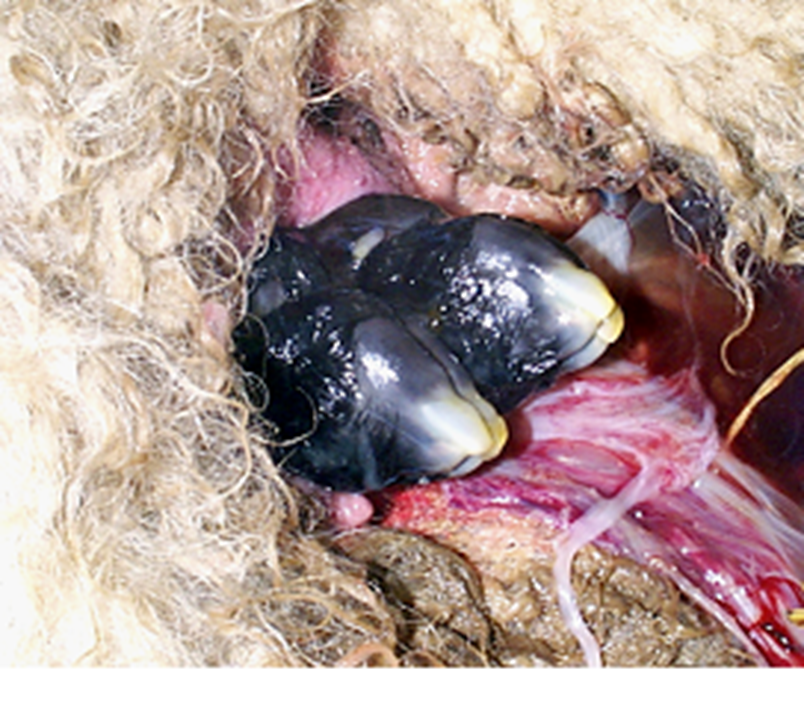 Figure 7: Lamb in posterior presentation - the lamb's hooves facing the roof of the vagina (not the floor). 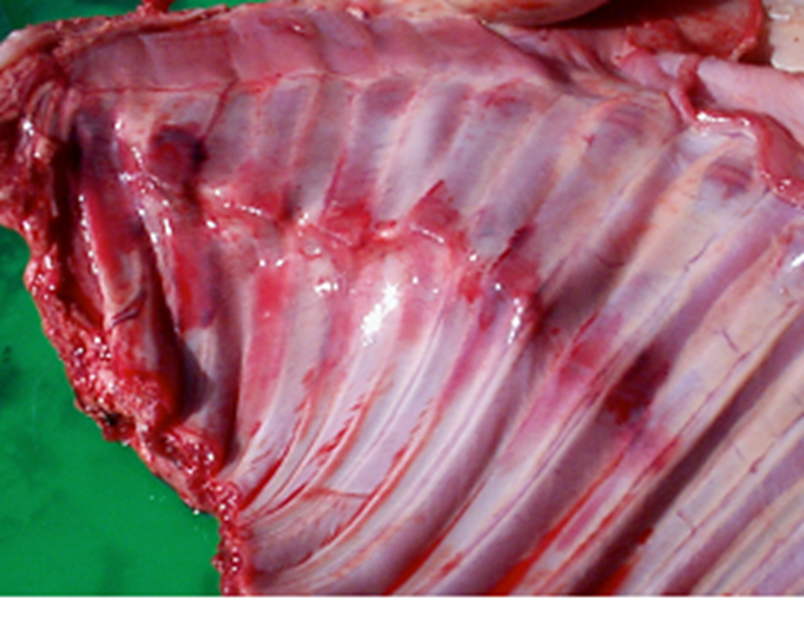 Trauma to the rib cage is common in large lambs (especially singletons) delivered in posterior presentation. Fractures of the ribcage can severely impair respiratory function and may cause death. Lambs that sustain rib fractures during delivery are more prone to respiratory disease.

Excessive traction of backwards lambs can also cause rupture of the liver and death soon after delivery. This is more common in certain breeds such as Texels and Cheviots as the sternum is relatively shorter compared to other breeds, which means that the liver is less well protected behind the ribs. 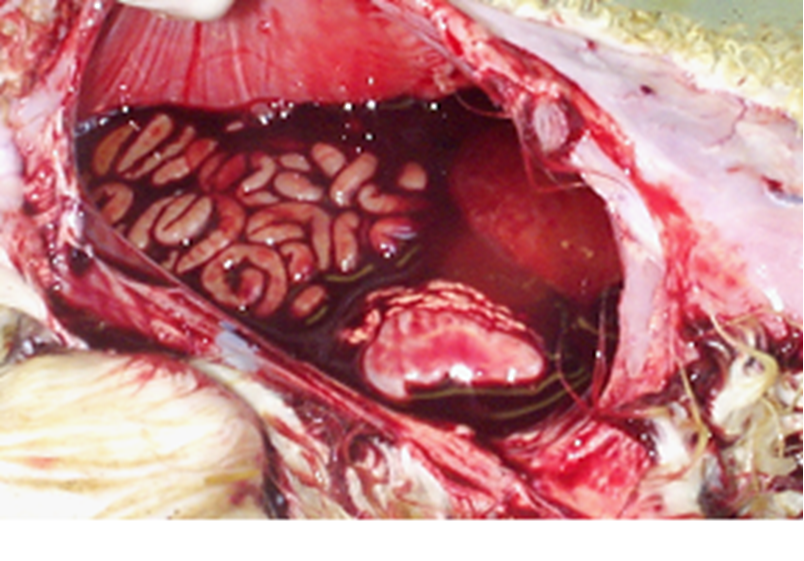 Figure 9: Necropsy reveals liver rupture and extensive haemorrhage as the cause of death in a Cheviot lamb delivered in posterior presentation.

In this presentation the lamb's pelvis and tail become lodged in the ewe's pelvic inlet and the hind legs are still pointing towards the head of the ewe.  Signs of second stage labour, such as powerful abdominal straining, are not observed because the lamb does not enter the pelvic canal to stimulate the reflex contractions.  Singleton lambs are rarely presented as a breech delivery. 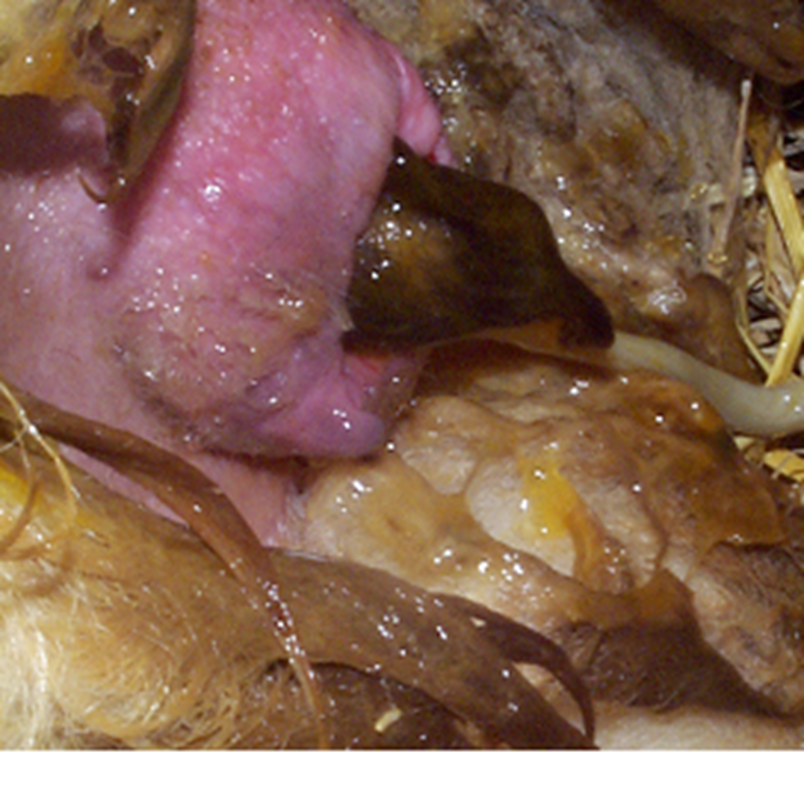 Figure 10: Occasionally, the lamb's tail may protrude for an inch or so through the ewe's vulva.

These lambing difficulties are detected by diligent shepherds recognising the signs of first stage labour which have not progressed to second stage labour within 12 hours. Sometimes these cases are not recognised until 24 to 48 hours after the lambs have died and the ewe becomes sick. The dead lambs rapidly become swollen with gas, and may result in death of the ewe if not addressed promptly.

Correction of a breech presentation involves extending the hips while the lower limb joints (stifle, hock and fetlock joints) are full flexed to protect the uterus; the flexed limbs may be cupped in the palm of the hand to prevent damage to the uterine wall.  The manoeuvre is facilitated by gently pushing the lamb back into the body of the uterus to allow the hind legs to be brought around and up into the pelvic inlet.  Great care must be taken during extension of the hip joints especially if the uterus is clamped down around the lamb as the reduction in space around the lamb may result in a tear or rupture of the uterus

There is a risk of an unskilled person rupturing the uterus during these maniupulations and veterinary assistance must be sought if there is any doubt regarding correction of the presentation.

An epidural injection administered by a veterinary surgeon facilitates the various manipulations during correction of the breech posture by reducing the powerful abdominal contractions.

simultaneously. It is necessary to identify which leg corresponds to which head by tracing the leg to the shoulder region, and then to the neck and head. Once both legs and head have been correctly identified they should have lambing ropes applied to ease retrieval. The other lamb is gently repelled as traction is applied to the first. Only gentle traction should be necessary to deliver a twin lamb in this situation; if little progress is being made it is essential to check that you have selected the correct limbs rather than pulling harder as this will result in injury to one if not both lambs.

Lateral deviation of the head (head back)

Lambs presenting in this manner are often dead. Both feet are presented in the pelvis with the head bent sideways or downwards. Lambing ropes should be applied to the limbs and the lamb gently repelled with the use of lubricant. A wire head snare or lambing aid can then be placed around the back of the head behind the lamb's ears and used to guide the head into the pelvic inlet along with the front legs. Plenty of lubrication is needed if the lamb is dead and its fleece is dry.

Embryotomy (Dissection and removal of a dead lamb)

If a ewe presents with a dead or rotten lamb and a caesarean section is not appropriate then your vet may carry out an embryotomy, where the dead lamb is removed vaginally following surgical dissection. This procedure must only be carried out on dead lambs by a veterinary surgeon as the risk of damaging the uterus and vagina is high, and additional treatment with antibiotics and anti-inflammatories will be necessary.