Regular monitoring of level of teat end hyperkeratosis and other teat lesions within a dairy herd can be an extremely usewful tool for monitoring the effectiveness of both the milking machine and the milking routine.

While a single teat score of the herd can be helpful, the most benefit is obtained when scoring becomes a regular part of the management routine so that changes can be monitored and reacted to in time. Regular teat condition scoring should be considered as important a management tool as regular mobility or body condition scoring.

In addition to regular scoring, additional scores can be carried out before and after major changes to the milking machine or the milking routine to act as a benchmark and monitor.

There are numerous factors which can influence the condition of the teats of a dairy cow.  When farmers discuss teat condition, they are invariably describing teat end hyperkeratosis, an example of which can be seen in Fig. 1. 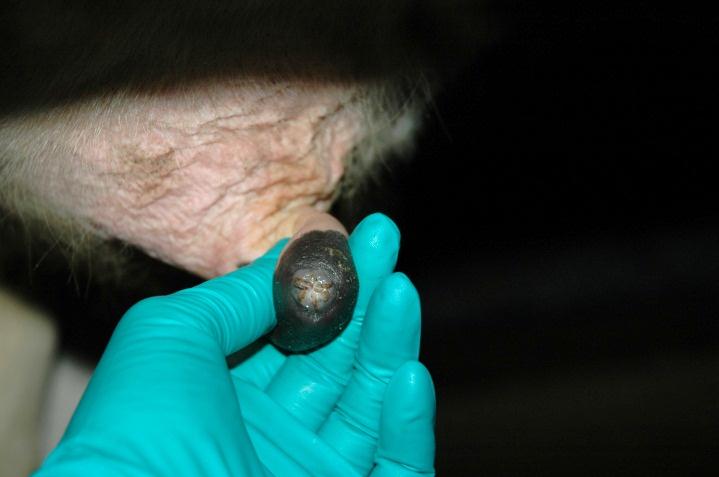 However, there are many other teat lesions and teat changes which can be measured and monitored which will provide an essential insight into what is happening during the milking process.

Some of the other important changes which can be measured would include:

Discoloured teats after milking are highlighted in Fig. 2. 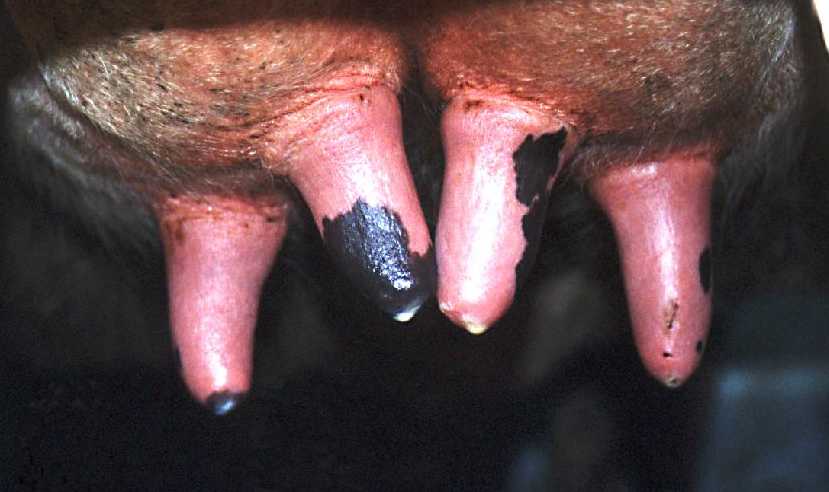 When changes occur to a cow's teats after milking, these changes can be considered to fall into three categories. These changes are either:

The role of teat lesions

This defence is aided by mature, lipid rich keratin cells lining the teat canal. In Fig. 3, the keratin lining of the teat canal has been stained red, and shows the convoluted nature of the canal. The keratin traps mastitis pathogens as they attempt to pass through the canal and these pathogens are then naturally removed from the udder during the milking process, when the shearing effect of milk flowing through the canal removes the outer layer of keratin. 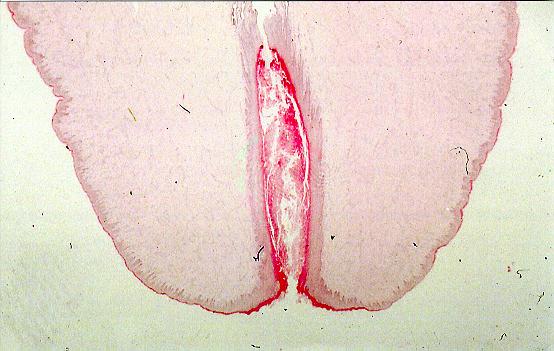 When the teat end is in good condition and not rough or damaged and the skin of the teat is soft and supple, the teat is best placed to provide a natural barrier to the invasion of mastitis causing pathogens.

Any short term challenges to a teat can result in a reduction in the teats natural ability to resist bacterial challenge. While most attention is focused on teat end hyperkeratosis, the presence of other short term teat conditions such as discolouration, oedema, teat end wedging and congestion are less well recognised. However, studies in Holland have confirmed any form of circulatory impairment can be associated with an increase in the risk of sub-clinical mastitis infection.

When teat skin becomes dry, as well as often leading to an increase in teat end hyperkeratosis, the teat barrel becomes harder to clean.  This can lead to an increased risk of infections caused by environmental mastitis pathogens such as Strep. uberis. Any open lesions on the teat skin can harbour contagious pathogens such as Staph. aureus. These lesions also cause discomfort for the cow during milk harvesting and can result in poor milking out. Fig. 4 illustrates a dry teat which will be difficult to clean. 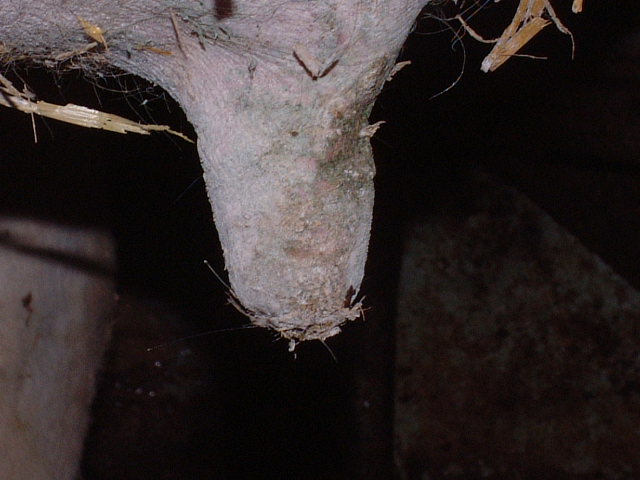 There have been a number of papers published by Teat Club International since 2001 describing the best practice for scoring and evaluating teat changes on dairy cows. It is obvious that teat condition assessments must be unobtrusive, well rehearsed and relaxed. Any interruption in the milker's routine, cow flow or cow behaviour caused by insensitive teat scoring can adversely influence the parameters which are being assessed.

For example, if teat scoring leads to a disruption in the normal milking routine or adversely effects cow flow into or out of the parlour,  particularly in situations without automatic cluster removers, this may result in more discoloration and oedema than would typically be seen on the farm.

There are a number of recommendations to follow when examining teats:

When assessing many of the short term teat changes, it is important to be able to establish the severity of what is being recorded. Normal teat colour should be recorded, as should teats which are red and blue. Blue discolouration is considered more severe that red discolouration.

Ringing at the base of the teat can be considered to be either absent, visible or palpable with a palpable ring considered the most serious.

Examinations of the barrel of the teat should confirm that a teat is either normal or firm.

Teat skin condition is also quite easy to assess. A teat will either be considered to be normal or dry. If a teat is dry this is a problem and therefore scoring as dry or very dry is not particularly helpful.

With the majority of these lesions, the intervention level is breached when more than 10% of teat examined show adverse changes.

Scoring teat end hyperkeratosis is slightly more complicated with four categories to consider. Several systems have been developed over the years to allow objective measurement of hyperkeratosis. Many of these scoring systems are complicated and best suited to the controlled environment of a research project.

In an attempt to provide a simple and reliable method to assess teat end hyperkeratosis which can be accepted as an international standard, the Teat Club International proposed a set of guidelines for observing teat condition and interpreting the findings. These guidelines were particularly targeted at extension workers, veterinary surgeons and farm managers.

For routine field evaluation, teat end hyperkeratosis can be considered to fall into four classes. This is demonstrated in Fig. 5. 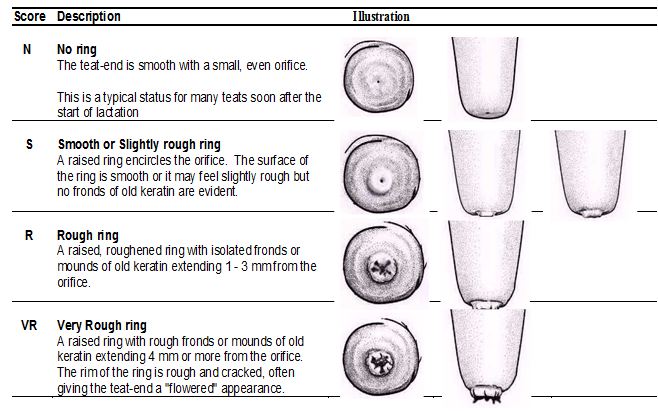 It is usually very difficult to determine which of many factors may be affecting the levels of hyperkeratosis within a herd. However, further investigations of the milking machine and the milking routine would be recommended if more than 20% of teats score R or VR, or more than 10% score VR. If a cow has one or more teats with a problem condition then that cow is considered to have a problem.

There are numerous factors which can affect the amount of teat end hyperkeratosis recorded including teat end shape, milk yield, peak milk flow rate, duration of milking and overmilking, stage of lactation, parity, teat skin condition and the interaction between the milking routine and the milking machine. The total time per day where the milk flow rate is less than 1.0 kg/min appears to have a significant effect on the level of hyperkeratosis found.

When there is evidence of bimodal milk let down or over milking, this is often associated with increased levels of hyperkeratosis (Fig. 6).

In general, hyperkeratosis is more severe with long, pointed teats, slow milking cows or higher producing cows. Teat scores change with stage of lactation and parity, increasing some 3 - 4 months post partum and declining as the lactation progresses. The Australian Countdown Down-under Milk quality programme (www.countdown.org.au) has produced a summary table linking risk factors for increased levels of hyperkeratosis. This is demonstrated at Fig. 7.

A number of other risk factors for commonly reported teat conditions are illustrated in Fig. 8.

As well as being an important consultancy tool, farm staff can be trained to undertake routine assessments of levels of teat lesions within a herd, identifying emerging problems quickly to allow rapid rectification.

Even if it not possible to come up with a definitive diagnosis for a particular teat condition identified, if it is possible to report an increase in the number of blue teats or an increase in the number of teats with a VR hyperkeratotic ring since the last scoring, this information can be passed to a veterinary surgeon or milking technology specialist to identify the reason for the deterioration.

The most important point is that the changes are identified early and trends followed so that if there are problems developing, these are identified and resolved quickly.

Recording and analysing the data collected can be time consuming so using spreadsheets already designed for the purpose can ease matters significantly. The University of Wisconsin hosts a teat scoring recording spreadsheet which allows data capture and analysis in two easy steps. The spreadsheet can be downloaded free ( http://milkquality.wisc.edu/milking-management/evaluation-tools) and makes record keeping relatively straightforward.

Accepting that regular and routine teat condition scoring is as important a management technique as monitoring mobility and body condition scoring will ensure that potential problems which can affect milk quality and mastitis are identified early and addressed before they cause significant financial losses.