Acidosis results from the sudden unaccustomed ingestion of large quantities of carbohydrate-rich feeds, typically grain or concentrates and, much less commonly, potatoes and by-products such as bread and bakery waste. 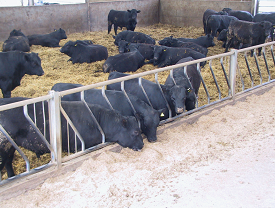 The smaller the particle size, for example following milling, the more quickly fermentation occurs, and the more severe the clinical signs for a given amount ingested. 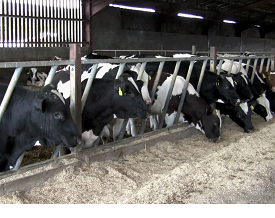 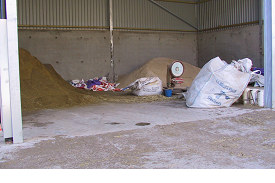 The severity of clinical signs depends upon the amount of grain ingested, whether the grain was rolled or whole and the rate of introduction of the dietary change. Colic signs may be observed soon after grain engorgement and cattle appear restless. Cattle are weak and may fall and experience difficulty rising. Tooth grinding is frequently heard. Cattle have a distended abdomen due to the enlarged static rumen; fluid also becomes sequestered within the intestines. There may be no diarrhoea for the first 12 to 24 hours after carbohydrate ingestion, thereafter there is profuse diarrhoea with a sweet-sour odour and may contain whole grains. The most severely affected cattle become recumbent and may die within 24-48 hours. Cattle that recover have a protracted convalescence. 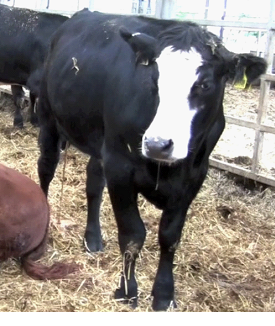 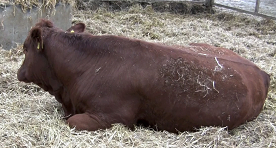 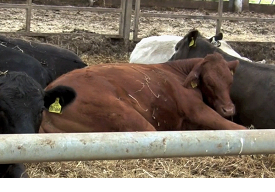 The most severely affected cattle become recumbent and may die within 24-48 hours.

Your veterinary surgeon may also consider:

Diagnosis is based upon the history and clinical findings, particularly once diarrhoea is evident.

Grain/concentrate feeding must be gradually increased over a minimum of six weeks before ad-libitum feeding. Allow more than 10 per cent good quality roughage in the diet. 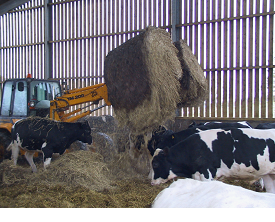 Barley straw as roughage and bedding. 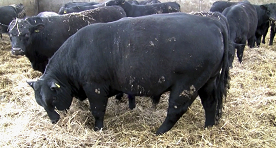 Cattle select the best straw; the remainder acts as bedding.

This term is used to describe the mobilisation of fat that frequently occurs around calving and during the first month of lactation in high-yielding dairy cows. This is thought to be a "normal" occurrence in high-yielding dairy cattle, which may have up to 20% fat in the liver in the immediate peri-parturient period (normal cow has less than 5%). However, if the negative energy balance is severe and prolonged, then more than 20% fat may be deposited in the liver which can interfere with liver function and result in exacerbation of energy problems and the development of acetonaemia. This may lead to fat cow syndrome. 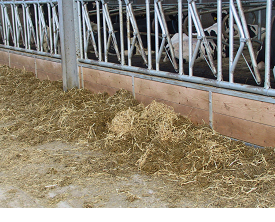 Fat dry cows (body condition score>4.0) lose too much body condition too rapidly during early lactation. Appetite is greatly reduced which further aggravates fat mobilisation and deposition within the liver, heart, and kidneys. Milk yield is greatly reduced. There is an increased prevalence of milk fever and clinical acetonaemia which may be refractory to conventional therapy. The incidence of toxic mastitis and retained foetal membranes/metritis is also increased. The mortality rate of clinical cases is high. 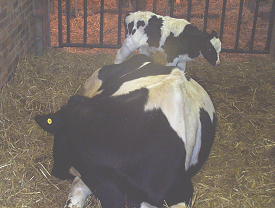 There is an increased prevalence of milk fever 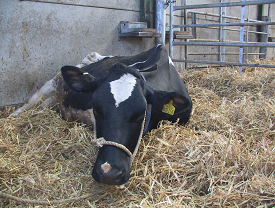 Cows with fatty liver are more prone to toxic mastitis 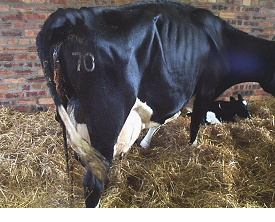 There is an increased prevalence of retained placenta and metritis.

Diagnosis is based upon history and clinical signs, in particular poor response to standard treatments for metabolic diseases such as ketosis. Typically, there is a large difference in body condition scores between dry cows and those cows calved one to two months. 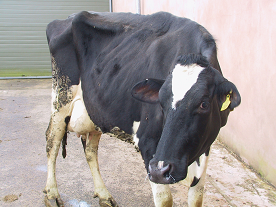 Dairy cow calved six weeks which has lost a great deal of condition since calving.

There is biochemical evidence of severe negative energy balance during early lactation. Liver enzyme and bilirubin concentrations are greatly increased. Necropsy findings include extensive fatty infiltration of the liver which is grossly enlarged, pale, with rounded borders. There is increased fat infiltration of the kidneys and heart. 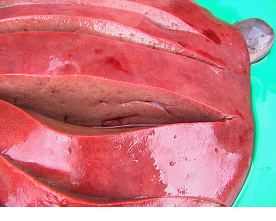 Necropsy findings include extensive fatty infiltration of the liver.

Symptomatic treatment may be attempted to enhance energy metabolism and promote liver function. Oral administration of glucose precursors such as propylene glycol (150g) or glycerine should be given twice daily by drench. Glucocorticoid therapy such as dexamethasone, stimulates glucose production and depresses milk yield thereby reducing energy requirements. Other therapies include vitamin B12 essential for the metabolism of propionate, and multivitamin injections.

Euthanasia may be the best option for advanced cases which are recumbent. 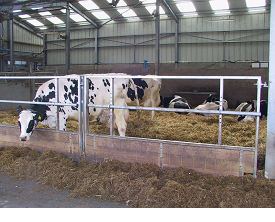 Do not overestimate the energy contribution from forages especially that fed to high yielding, early lactation cows at pasture. Any dietary changes should be made gradually. Group cows according to their nutritional requirements. Avoid overcrowding and stress particularly in recently-calved cows. Do not overfeed concentrates. Regularly monitor nutritional status including body condition scoring of cows, faecal consistency, and metabolic profiles where appropriate. 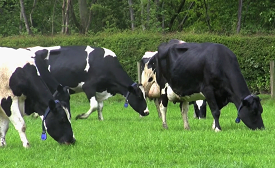 Do not overestimate the energy contribution from forages especially high yielding early lactation cows at pasture. 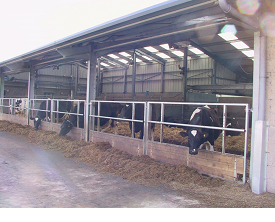