Bluetongue in Cattle and Sheep

Although sheep are most severely affected, cattle are the main mammalian reservoir of the virus and are very important in the spread of the disease. Bluetongue is a notifiable disease in the UK and suspected cases must be reported immediately to the Divisional Veterinary Manager at the local Animal Health Office. There are many different strains (serotypes) of Bluetongue with each given a number (currently up to 27). Animals that recover from infection with one serotype will be immune to that strain but not to others.

The virus is transmitted by biting Culicoides midges and not normally from direct contact with infected animals. Peak midge populations occur during the late summer and autumn in Europe and therefore this is the time when Bluetongue is most commonly seen. The midges can be carried very large distances on the wind (over 200km) and this has been the primary way bluetongue serotypes are introduced into new areas.

Historically Bluetongue has been confined to tropical and subtropical areas (Central Africa, South East Asia) but climate change and trade patterns have seen increasing outbreaks in temperate regions (including Northern Europe) in recent years with outbreaks of up to 9 different serotypes occurring in Europe over the last 10 years. The most significant of which was the BTV-8 outbreak in Northern Europe in 2006-2008. Bluetongue (of any serotype) is currently absent in the UK but there is a significant risk of it being reintroduced with midges blown over the English Channel from continental Europe during European outbreaks. In July 2019 BTV-8 was circulating in Germany with a small number of outbreaks in Belgium. 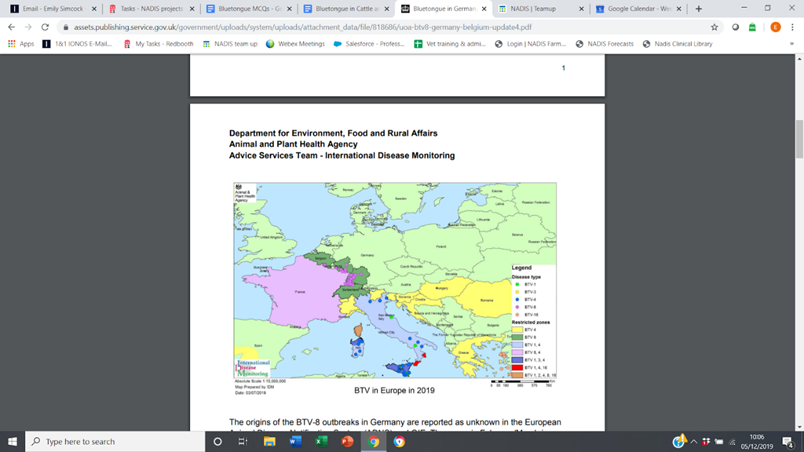 Bluetongue virus infection has an enormous impact on sheep production in many countries on the African continent and elsewhere. Losses result primarily from mortality, reduced production during protracted convalescence including poor wool growth, and reduced reproductive performance including temporary ram infertility. Mortality rates can be high, with an average of 5% in the 2006 BTV-8 outbreak in the Netherlands, though in some flocks this was over 70%.

Bluetongue is characterised by changes to the mucous membranes of the mouth and nose, and the coronary band of the foot. Clinical signs are generally more severe in sheep but cattle can show signs of disease. A veterinary surgeon must be contacted by the farmer where large numbers of sheep or cattle present with lameness, high rectal temperatures, drooling, excess tear production and discharges from the eyes and nose.

The clinical signs in sheep follow an incubation period of four to 12 days and vary depending on virus strain and sheep breed. Usually, only a small percentage of sheep develop clinical signs, however deaths in some flocks can be as high as 70%. In extensively managed flocks, unexplained sudden deaths may be the first evidence of disease. Animals that survive the disease can lose condition with a reduction in meat and wool production.

Affected sheep have a fever (up to 42.0°C) and appear stiff and reluctant to move.  They often adopt an arched back stance with the neck extended and the head held lowered.  There is swelling of the face and ears, and also fluid in the lungs which may cause breathing difficulties. Skin erosions may appear on the lips progressing to ulcers. There is often profuse drooling, and a clear to cloudy nasal discharge. There may be reddening of the coronary band, and around the muzzle and mouth. The tongue may become swollen and lack of oxygen may make the tongue and mucous membranes appear blue (hence the name of the disease) but this does not always occur. Bluetongue can also cause pregnant sheep to abort and infection during the breeding season may result in a large percentage of early embryonic losses with sheep returning to oestrus at irregular intervals. Foetal deformities similar to those seen with Schmallenberg virus can also sometimes occur. 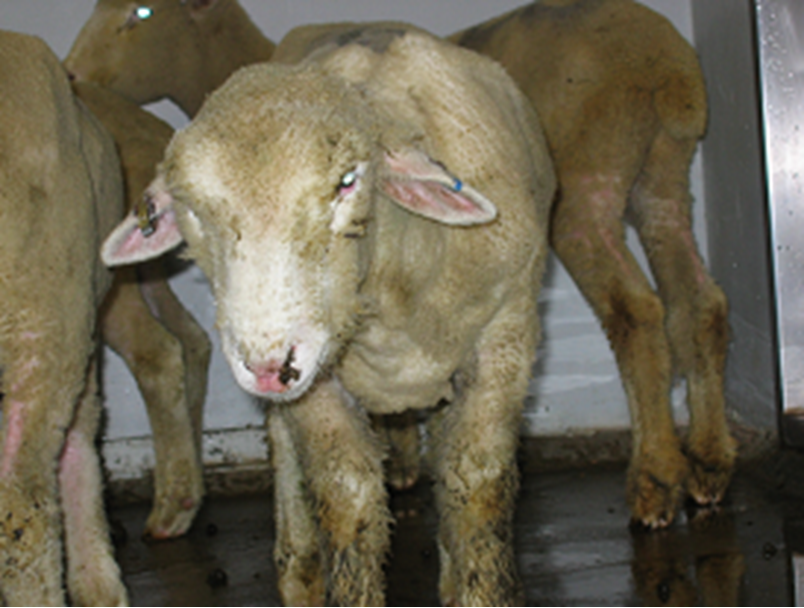 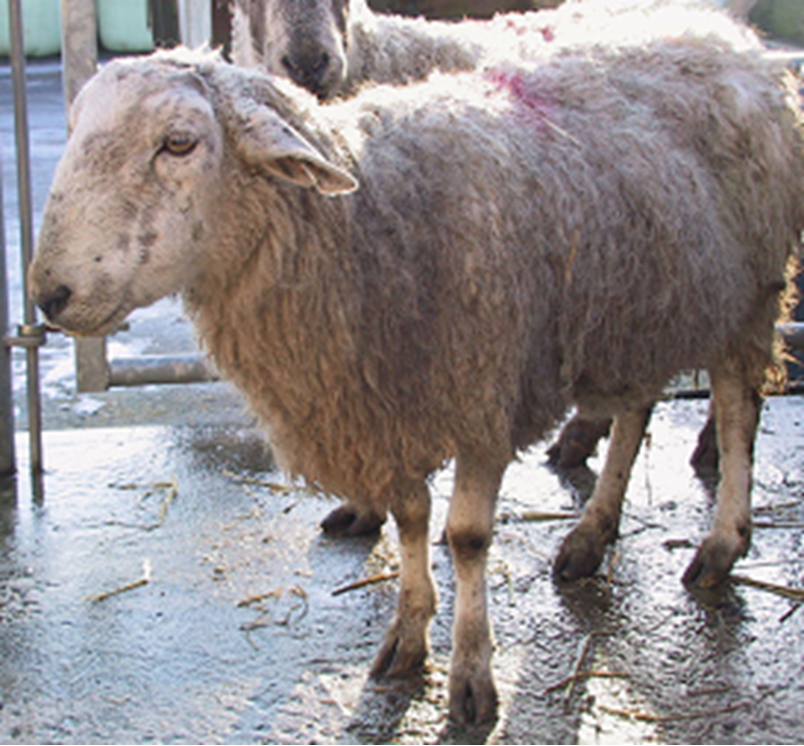 Figure 3. Swelling of the face and ears in a sheep which is stiff and reluctant to move 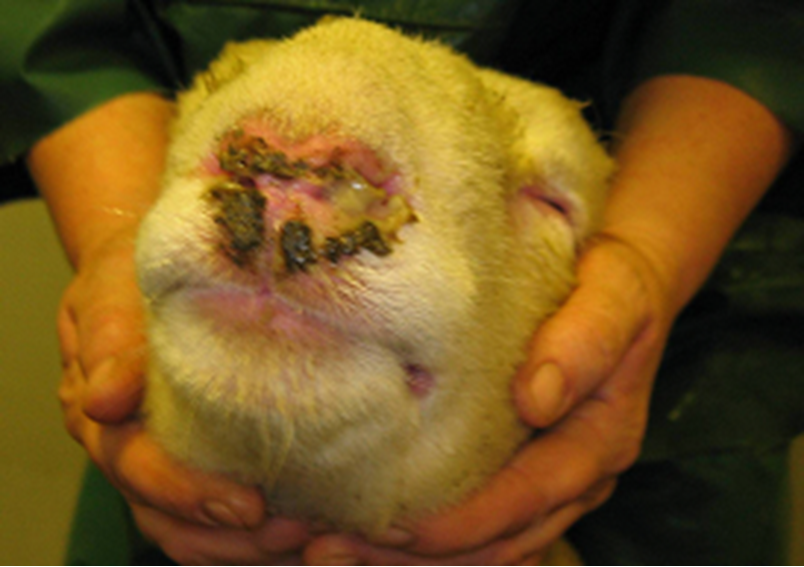 Figure 4. Facial swelling, nasal discharge and excoriation of the skin in a BTV infected sheep.

In sheep, Foot and Mouth can cause some similar clinical signs. Orf may cause ulcerations of the mucous membranes but is not usually a cause of high fever or mortality. Clostridial disease may cause sudden death, fever and facial swelling but this is usually sporadic and in unvaccinated sheep. 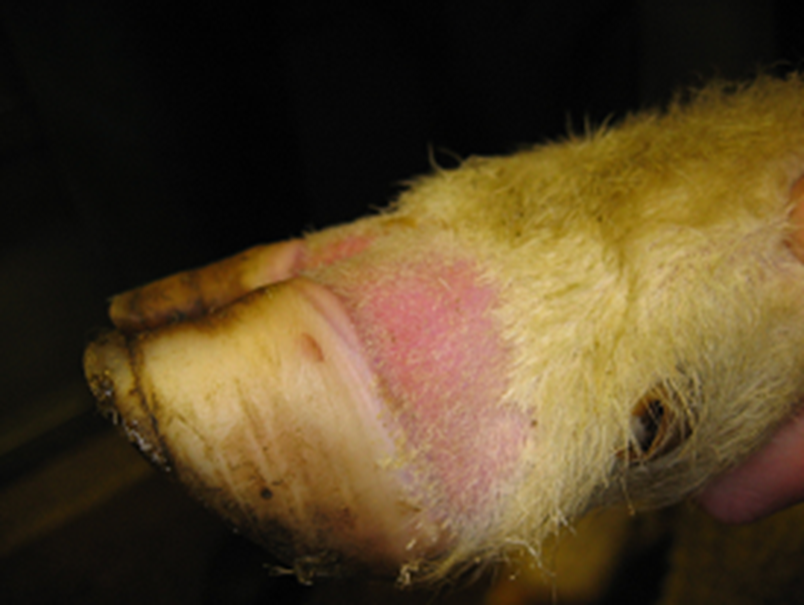 Figure 5. Typical foot lesion found in BTV infected sheep involving coronitis and inflammation of the whole claw region but no formation of blisters.

Cattle affected with Bluetongue have a fever (up to 40.0°C), appear stiff due to swelling of the coronary band at the top of the hooves and are very reluctant to move. There is a clear to cloudy nasal discharge and erosions on the muzzle with sloughing of the surface layer.  There is excess tear production but no obvious eye lesions. Mortality rates are usually much lower in cattle than in sheep.

Once again, the most important differential diagnosis is foot and mouth disease where there is profuse drooling, lameness and high rectal temperatures rapidly spreading to affect all cattle on the premises. Other causes of some similar signs are infectious bovine rhinotracheitis (in a group or herd) and malignant catarrhal fever in individual cattle. 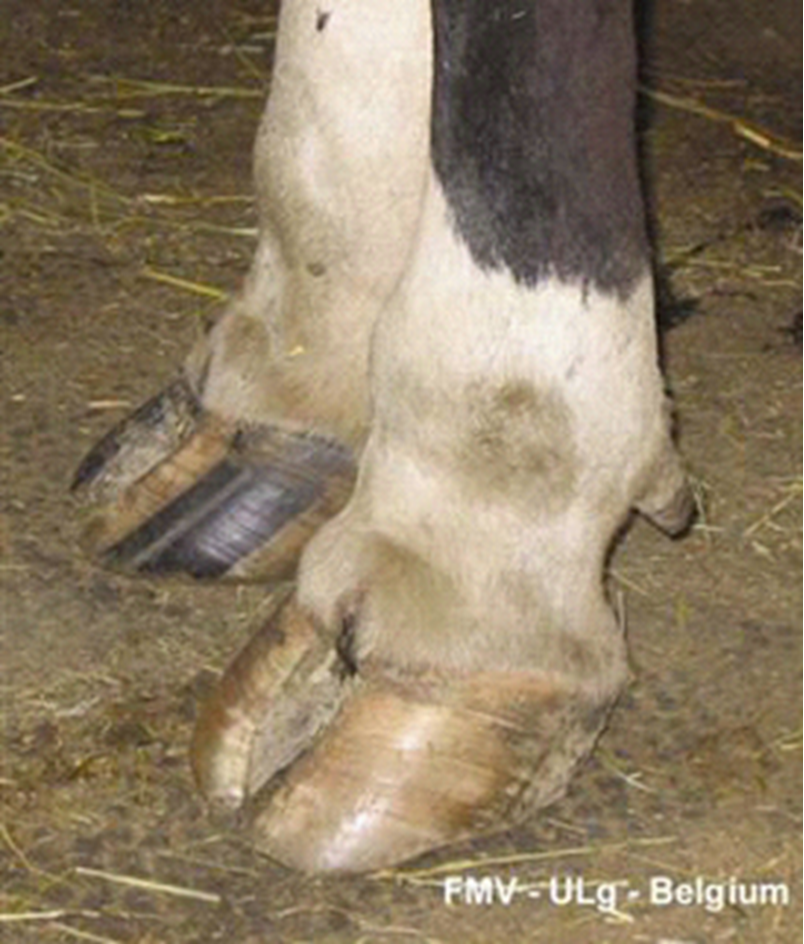 Figure 6. Affected cattle appear stiff due to swelling of the coronary band at the top of the hooves 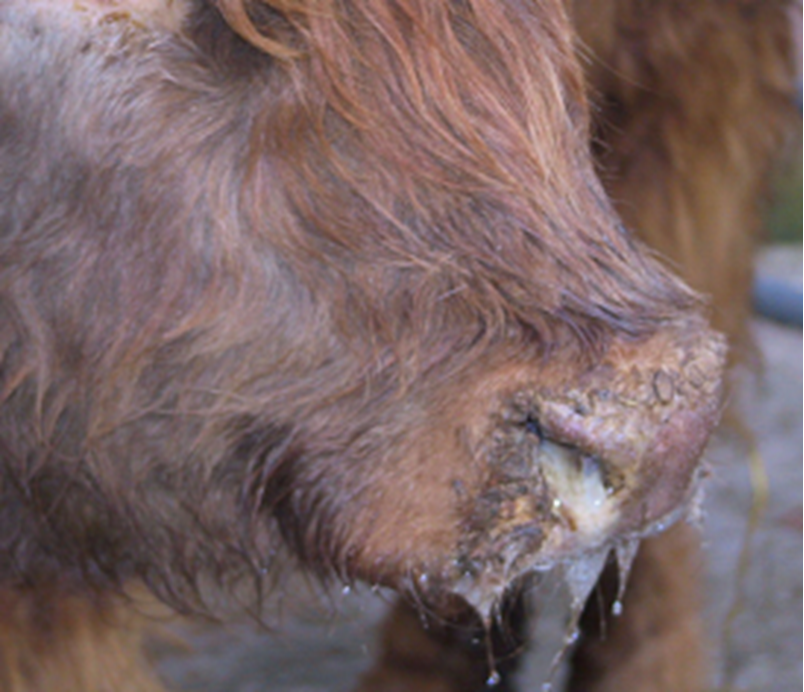 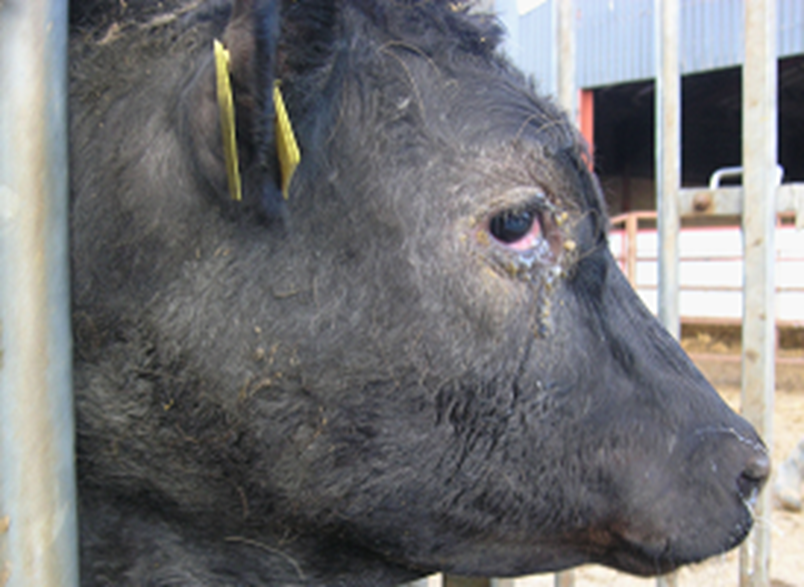 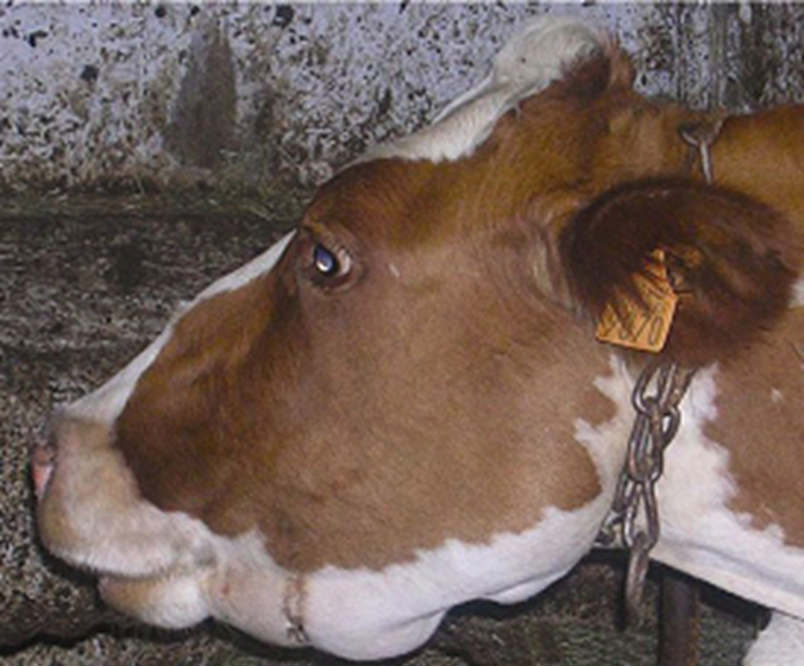 Figure 9. Swelling of the face 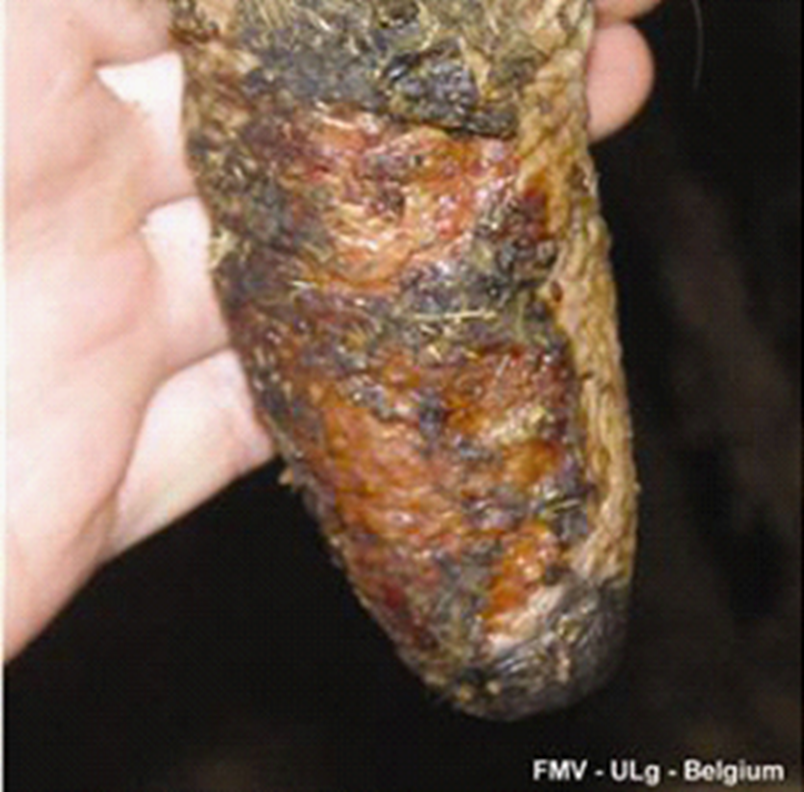 Figure 9. Extensive teat erosions may develop in some cattle

Diagnosis is based upon clinical signs, virus detection by testing for fragments of the virus using a sensitive technique called PCR or blood sampling to test for antibodies to bluetongue virus.

Treatment is limited to antibiotic therapy to control secondary bacterial infections and anti-inflammatories to treat the symptoms.

Control of bluetongue is very difficult because of the large number of potential hosts and virus serotypes. While control is aimed at keeping susceptible animals away from the vector this is not always practical. Control of the midges can be attempted with pour-on insecticides but this is expensive and does not achieve total freedom from the midge. Movement restrictions on affected animals may help with reducing spread to disease free regions but given how far the midges can blow restricting stock movements is of limited use in outbreaks.

The main prevention for BTV is vaccination. The BTV-8 vaccines available in the UK are killed vaccines. It is important to realise that there is no cross-protection between serotypes; vaccination against BTV-8 will not protect against other serotypes of BTV. The vaccines also don’t act immediately with cattle requiring two doses of vaccine at least 6 weeks apart to be protected. Illegal importation of unlicensed, live vaccines has caused several outbreaks of disease in Northern Europe.

In many countries the timing of vaccination will depend upon local factors, in particular the occurrence of high-risk challenge periods from infected midges. Large scale vaccination efforts were important in controlling the BTV-8 outbreak in 2006-8. The virus however probably continued to circulate at low levels (in both domestic and wild ruminants) and re-emerged in 2016-17 when large numbers of naive animals were present again in European herds and flocks. Recent studies have shown that a vaccination effort of >95% of all susceptible animals for more than 5 years would be necessary to eliminate the virus altogether in Northern Europe. As this is unlikely to be achieved, monitoring of the current disease situation and choosing to vaccinate in advance of high risk periods is the only practical solution to preventing BTV at present.