Parasites are a hazard for all pigs but those kept in more extensive conditions and in permanently occupied areas that are never washed are more likely to build-up significant worm populations that can become a burden to the animals.

Slatted accommodation particularly operated on an all in all out basis tends to prevent build-up of worm burdens. All worms affecting pigs are host specific and have a life cycle in which adults produce eggs, which develop and hatch into larvae outside the host animal. None of the UK pig worms require eggs to be exposed to chilling before they hatch into larvae. These larvae go through a number of transitional phases that sees them re-enter the pig and progress to the adult stage. Some degree of migration within the body may occur prior to the developed larvae reaching its target destination.

For practical purposes we can restrict this discussion to a small number of worms found commonly in UK pigs.

Two worms are found in the gut of pigs that are classified as strongyles . 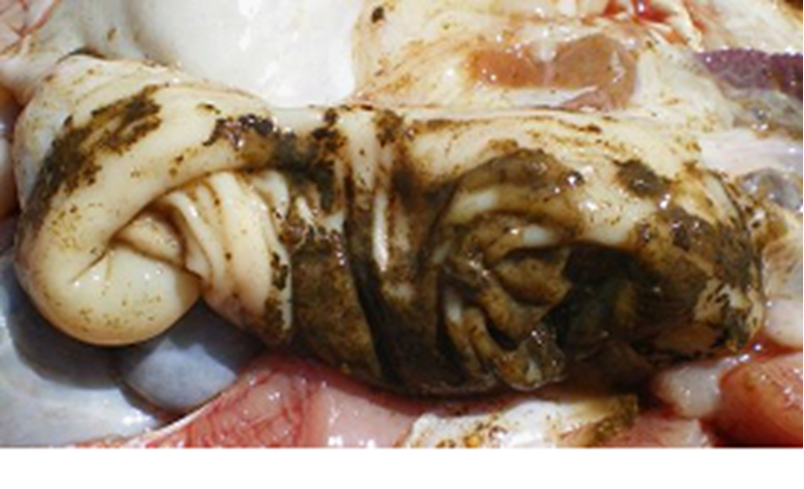 Fig 1: Coffee granule appearance of gastric mucosa due to partial digestion of blood

Both of these worms have a direct life cycle in that no other animals are involved in the life cycle. The eggs produced are relatively fragile and will die if dehydrated. (Fig 2.)

The full cycle for egg production to adulthood is 4-7 weeks although there is some variation with temperature and moisture levels - warm conditions favour maturation of larvae to infective forms. Egg excretion may increase from sows prior to farrowing, providing a rich source of larvae to infect young piglets. 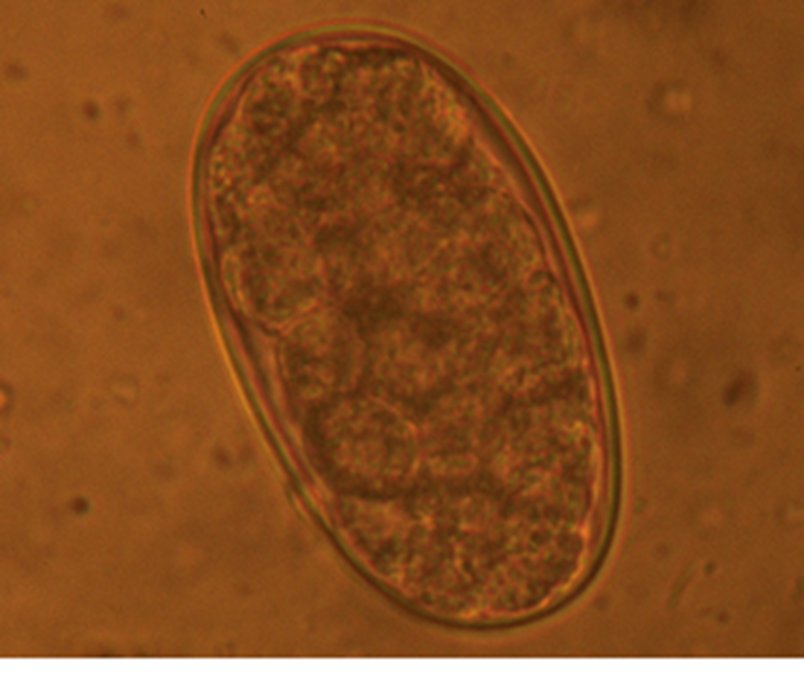 Clinically, these two worms have traditionally been linked to the "thin sow syndrome" and any animal suffering poor body condition should be suspected of being infected and treated accordingly. Moreover, immunity to these two worms is poor and as such repeated exposure and build-up of eggs and larvae within the environment will simply progressively increase the burden on the pig, irrespective of age.

Metastrongylus apri is unique amongst UK pig worms in that it has an indirect life cycle, which requires the larvae that hatch from the eggs (coughed up from the lungs of the pig, swallowed and excreted in faeces) to infect the earthworm to enable it to develop into an infective stage.

Consumption of infected earthworms, which are known to survive in soil for three years or more, results in the larvae penetrating the wall of the pigs' gut and migrating to the lungs where they mature to complete the life-cycle. 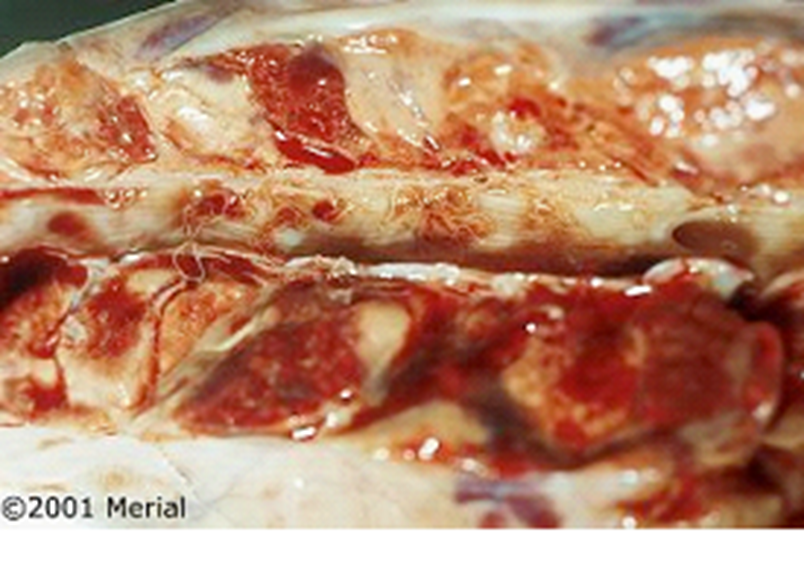 Fig 3: M apri within the airways of the pig.*

It is thus obvious that lungworm is only seen in situations where there can be access to earthworms. This will include outdoor situations, pigs housed on earth floors and occasionally in pigs on deep straw systems that are allowed to build-up over a long period of time. (Fig 3.)

Clinically, coughing is the principal clinical sign in pigs affected with lungworm, as well as loss of weight and a predisposition to secondary pneumonia.

The large roundworm, Ascaris suum, is responsible for the development of "milk spot liver" in growing pigs (fig 4). 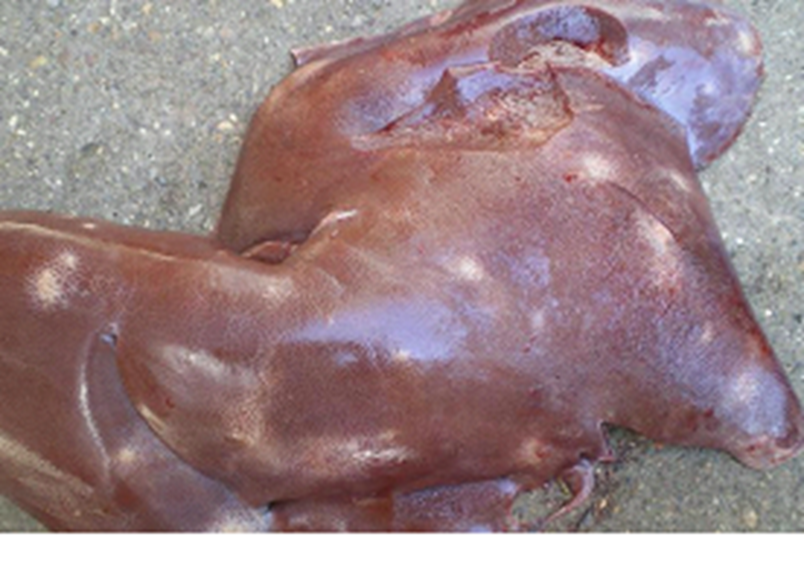 Again, the life cycle is direct with a small number of adult worms capable of producing, intermittently, vast numbers of eggs which mature and hatch in the environment at a rate determined by temperature, before re-infecting pigs. The mature larvae, once swallowed, penetrate the gut wall and migrate around the body typically through the liver (causing milk spot lesions) and from there into the lungs where they may cause coughing. They are then coughed up, swallowed and return to the gut where they mature to adults within ten weeks of eggs being shed. (Whilst related to the Toxocara species of worms in dogs and cats, there is no evidence to show that the migrating larvae of A suum infect people or migrate within them to cause blindness etc)

There are a number of key features with Ascaris:

The eggs are virtually indestructable and can survive in the ground for many years, covered by a sticky coating (fig 5). 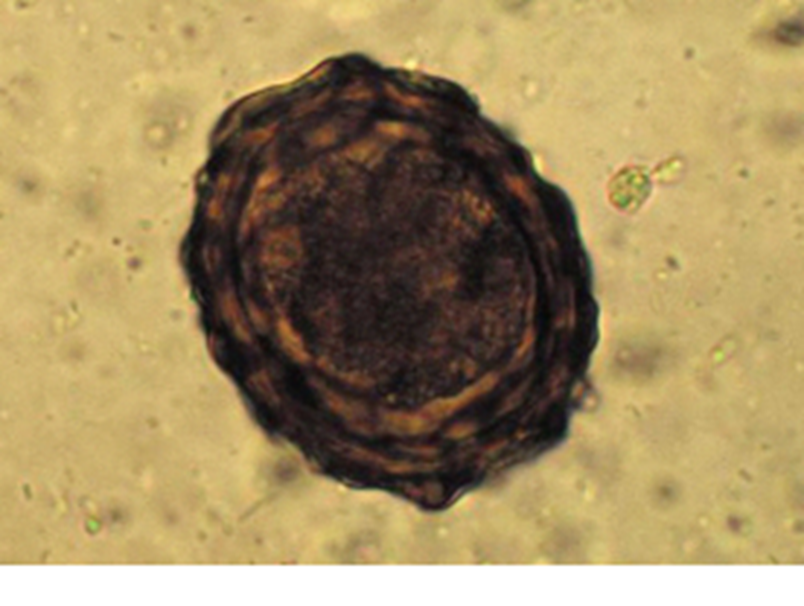 Immunity to adult worms can develop but a sow may live in balance with the parasite - harbouring no more than a handful of adult worms that are all a rich source of eggs.

Milk spot lesions are temporary, resolving in 6-8 weeks and tend to peak in incidence in late summer/autumn, as the warmth of summer favours acceleration of the life cycle.

In many cases there will be no clinical sign of Ascaris infection until the burden of infection becomes high. Slower growth, weight loss and poor feed utilisation will occur but in extreme cases jaundice and liver failure can occur, and coughing may be a feature in young pigs in those recently infected as migration of larvae through the lungs progresses. In very heavy infections with matured worms, blockage of the gut and death can occur, particularly in growing pigs.(Fig 6) 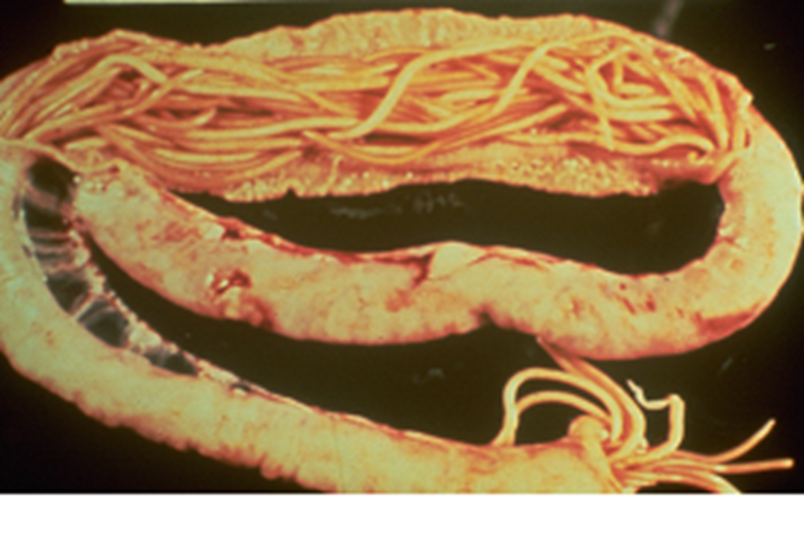 Fig 6: A. suum blocking the intestine

The whipworm Trichuris suis also has a direct life cycle with the adult worm living in the large intestine of growing pigs, feeding on the gut wall and in heavy infection producing enough damage to cause a bloody mucoid scour not unlike swine dysentery (fig 7). 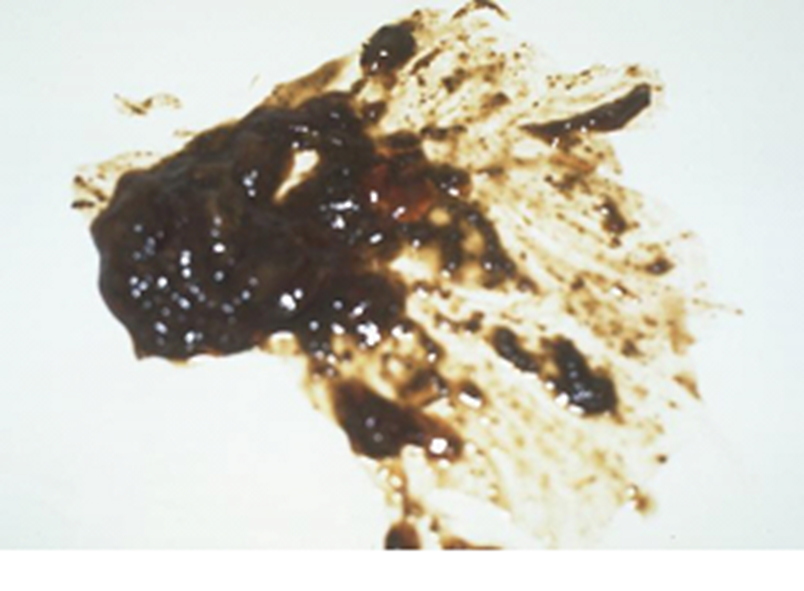 Like the Ascaris egg, Trichuris eggs shed in the faeces of the pig are highly resistant to destruction (fig 8) although they can be washed away from the environment relatively easily. 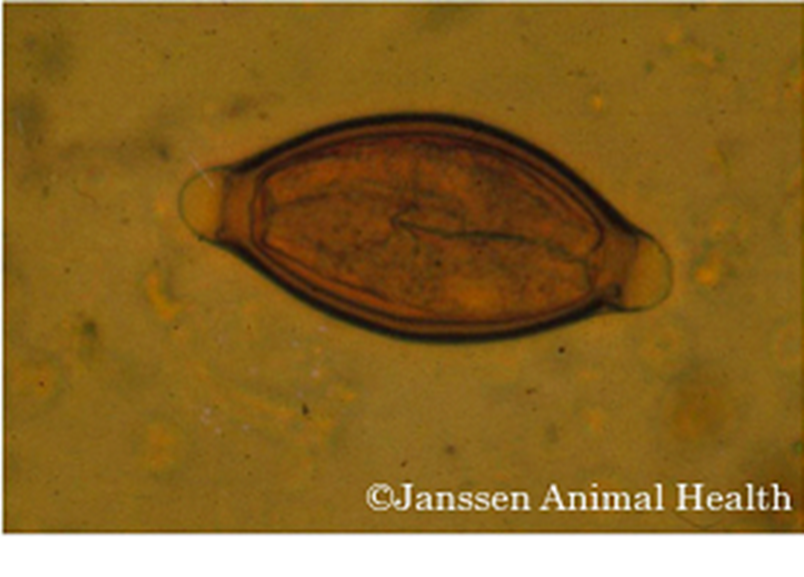 Fig 8: T suis eggs with typical opercula at either end.** (Janssen AH is not part of Elanco Animal Health)

The full life cycle is temperature dependent and takes up to three months. The clinical picture, however, can be seen within a month of exposure to infective larvae.

Trichuris can be very difficult to treat, causing continuous or repeated bouts of disease and weight loss in pigs kept in infected accommodation.

Two classes of chemicals are available for the worming of pigs.

Both classes of wormer are highly effective in treating pig worms and efficacy of Benzimidazoles against strongyle worms has been shown to be close to 100%, unlike the situation in sheep worms where resistance is a major problem. Benzimidazole wormers have the advantage over the avermectins in that they kill eggs and larvae as well as adult worms. In all cases, meat-withholding times apply but these are typically shorter in all cases for products administered orally.

In occasional situations where an extremely high worm burden has built up in the pig worming can actually be harmful leading to mass killing of worms that can damage tissues of the body. Severe respiratory or enteric disease (coughing and scouring ) can result depending on where the worms reside.

In common with the use of antibiotics on farm (which incidentally have no effect on worms), anthelminthics should follow responsible use principles ( see RUMA guidelines:  https://www.ruma.org.uk/pigs/anthelmintics-pigs/. ) They should always be used at the correct dosages (unless otherwise instructed by the by a veterinary surgeon) and only used where and when necessary.

Worming programmes need to be tailored to the individual circumstances of the farm but some general guidelines can be given. 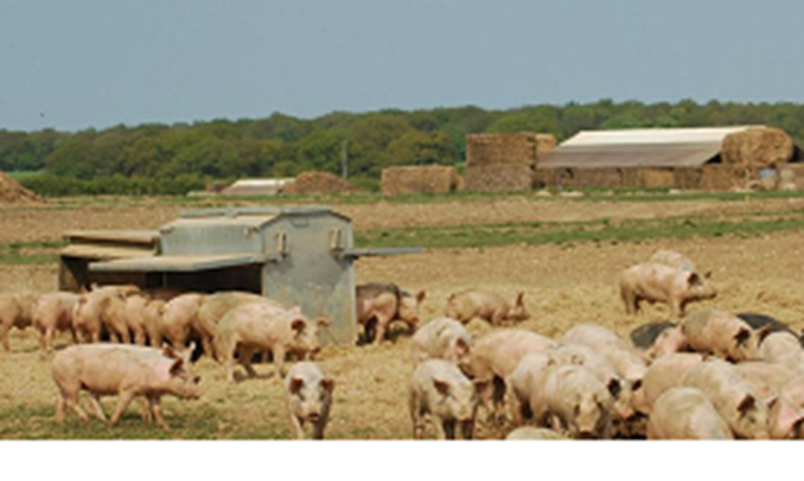 Fig 9: worming of pigs kept extensively should ideally be accompanied by a move to clean ground.***

As important as therapeutic or prophylactic worming, attention to the husbandry of the pig is necessary. Worms are the result of faecal-oral recycling and thus hygiene plays an important role. Regular removal of faeces from paddocks and moving to clean ground are vital to avoid parasite build-up and in housed animals, regular washing and disinfection are needed. Use of detergents will help remove Ascaris eggs but their destruction can only be reliably achieved either by burning (flame gun) or lime washing. In both cases, there are serious health and safety considerations for the operator.

For the smaller pig keeper, especially in backyard situations, pigs may occupy uncleanable ground for many years, with the land becoming 'pig sick'. It may, in some cases, be necessary to totally abandon pig keeping on such ground where Ascaris or Trichuris have occurred. If lungworm is known, removal from the ground for three years is necessary; in cases of enteric strongyles a year's break may suffice.

To avoid build-up of disease in the first place, regular and routine worming following a specific programme advised by the veterinary surgeon is essential in smaller herds, taking into consideration the need to treat for mange and lice as well.

There is no significant cross over between worm parasites of the pig and those of ruminants when species are mixed. However, the principles of land management to reduce worm burdens in all species are similar