The post mortem meat inspection process undertaken within all abattoirs is intended to identify and reject any meat that is deemed unfit for human consumption.

As a result, many plucks (liver, heart and & lungs) of slaughter pigs are rejected along with parts of carcasses such as heads, individual legs, skins etc. A typical commercial farm in the UK is not penalised by the abattoir for pluck condemnations but trimmings can account for an average 2kg in every 1000kg slaughtered (0.2%) being deducted. However, this can be very variable week on week and between abattoirs.

Furthermore, many carcasses that require trimming are also downgraded with a financial penalty imposed on the whole carcass. This can be worth more than £5/pig on top of the lost weight.

Pig farmers, however, are more commonly concerned when whole carcasses are rejected - losses that ought to be added to the on farm mortality figures as constituting unmarketable animals.   Unfortunately, information supplied to farmers with respect to rejected carcasses is often delayed, vague and illegible.  The aim of this note is to briefly outline the most common causes of whole carcass condemnations and review the likely underlying causes to enable control measures on farm to be drawn up and to allow better selection of stock for slaughter.  It is an offence to submit an animal for slaughter for human consumption knowing it to be unfit although in practice this largely relates to treated animals that have not passed the full meat-withholding period for the medicine used.

According to the Food Standards Agency figures, 3 whole pig carcasses in every 1000 slaughtered in England and Wales were rejected and condemned in 2015 due to pathology. (A further half a carcass per 1000 pigs was lost due to factory faults giving a toal loss of 0.35% of all pigs slaughtered - a figure which has not changed in 10 years. Individual farms vary widely. The most common conditions described leading to rejection are shown below and a brief description of the more common causes is required.

Where a localised superficial single abscess is found in the carcass it would usually lead to trimming and rejection of the affected area. Such lesions are not uncommon. However, where more than one abscess is present, even if in diversely different parts of the body, there is usually a presumption that there has been bacterial spread from one to the other via either the blood stream or the lymphatic system.

The implication is  that  bacterial  infection  might  have spread throughout the body and this renders the whole carcass unfit for human consumption. It is therefore necessary to attempt to identify what might have caused an initial focus of infection in the body leading to the primary abscess, which then spreads.The simple answer to such a question is any penetration of the body's integrity either through the skin or the mucosal surfaces (e.g. penetration within the mouth or oropharynx) or within the body cavities although certain conditions tend to account for most cases 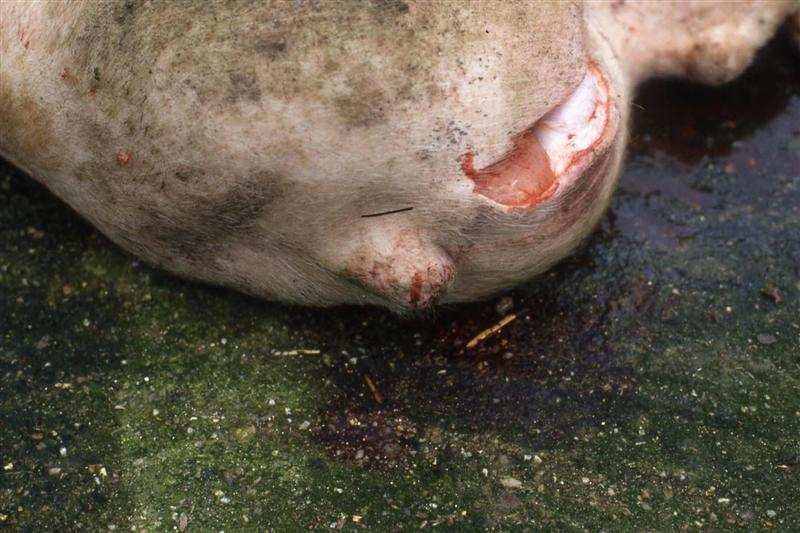 Typically such lesions could be the result of: -

4) Tail and ear biting lesions particularly where these occur early in life and the lesion itself has largely or totally healed by the time the pig reaches slaughter weight.  Therefore, tail damage may not be evident even after dressing of the carcass. (Fig 1). Infection entering tail lesions spreads primarily up under the spine via the lymphatic duct and tends to set up abscesses in the abdominal cavity close to the spine. They can spread into the spinal column.

6) Septic pleurisy.   Since the arrival of PMWS on most UK farms there has been a rise in severe pleurisy lesions, which in the most severe form can set up abscessation within the musculature of the rib cage.  If restricted to this area, trimming may be possible with rarely only partial carcass rejection. Where infection has spread beyond the thorax (chest) whole carcass condemnation will occur.

On many farms incurring only the occasional case of 'pyaemia' at slaughter it is too late to identify the underlying cause back at the farm.  However, where cases occur at a more regular rate investigations of the whole growing herd may be needed to identify possible underlying causes. Nationally, 'pyaemia' accounts for more than 50% of carcasses wholly rejected at slaughter.

(Note it is not uncommon for a carcass to be damaged by slaughter line machinery rendering it valueless. In such cases the responsibility lies with the abattoir and the producer will still get paid as if it has passed meat inspection).

Septicaemia refers to presence of pathogenic bacteria within the blood stream i.e. represents an earlier stage of infection than multiple abscessation that may result from it.

An acutely septicaemic pig will be ill - usually depressed, pyrexic and inappetant.   Such animals should never be loaded for slaughter, but if they are, they are likely to be detected at ante mortem inspection and rejected at that point.

Carcasses that are described as septicaemic will tend to have chronic lesions in the chest and abdomen (in the  absence  of  pus)  and  would  more  accurately  be  described  as  polyserositis.

Glassers  Disease (Haemophilus parasuis infection) in the young grower is likely to be the cause of most such cases.

Arthritis is inflammation of the joints and can be

Where a single joint is affected and provided there is no evidence of  spread  of  infection  from  or  to  the  joint, rejection is likely to be restricted to the affected leg only. However, if there is any doubt the whole carcass will be rejected. Where more than one joint is affected it is likely that the whole carcass will be rejected and the reason given as generalised abcessation. Such cases will often be evident in the live pig and will usually render the pig not only unsuitable for presentation for human consumption but unsuitable to be transported on welfare grounds and should be euthanased on farm.

The most common cause of single septic arthritis joints (Fig 2.) is previous tail biting with bacterial spread to the joint.   Such cases should not be submitted for slaughter for human consumption but if they are, they are likely to be rejected on the grounds of pyaemia. 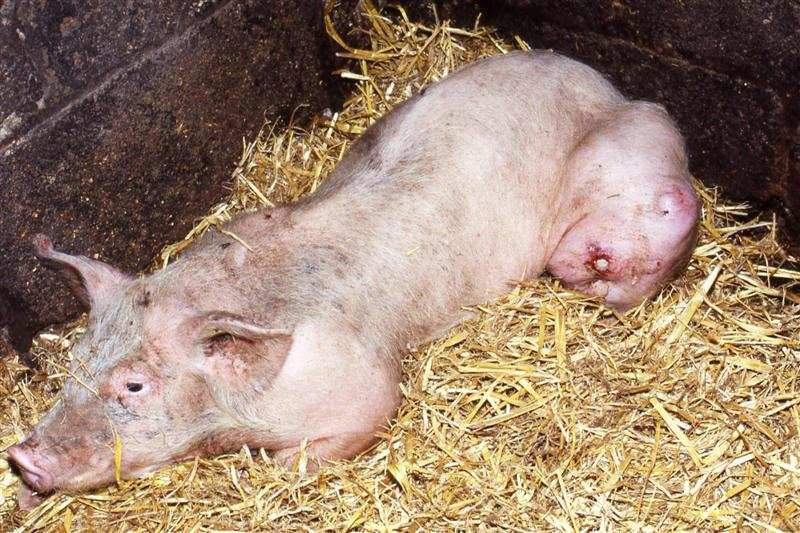 Fig 2: A single joint severely affected with septic arthritis - such a pig should never be submitted for slaughter for human consumption but surprisingly some are - especially if not discharging as seen here

Oedema is the accumulation of fluid within the tissues and particularly where it occurs in muscle it renders the carcass unfit for human consumption. The fluid leaks out from the blood stream due to blood pressure abnormalities or biochemical abnormalities in the pig. There are a number of possible causes of oedema in the carcass:

a) Emaciation - poor condition pigs lack circulating protein which is required to maintain the correct fluid balance between the bloodstream and the peripheral tissues. As the outlets for casualty pigs continue to decline it would be expected that the incidence of such pigs being offered for slaughter would decrease

b) Hypoproteinaemia - the sudden reduction in circulating protein in an outwardly 'normal' pig. The most likely cause of this is the massive protein loss that occurs through the kidneys in acute PDNS.

It should be remembered that renal damage can occur without the typical skin lesions associated with PDNS.

c)  Congestive Heart Failure. This results in pressure build-up in the venous return system and creates leakage of fluid in peripheral tissues. In modern pig production the most likely cause of such problems in an otherwise apparently normal pig is constriction of the heart by chronic pericarditis lesions commonly seen at slaughter.

There are a whole range of "one off" conditions including lymphosarcoma, melonosis,  jaundice & anaemia that would render a carcass unfit for human consumption but these are of limited economic significance and generally require no on farm action.

Unfortunately, the information available to the pig farmer as to the detail of carcass rejection is often sketchy, delayed and confusing.  Where regular problems are experienced it is well worthwhile requesting the farm's own veterinary surgeon attend the abattoir to undertake a detailed examination of any detained carcasses. It should be highlighted that the nature of the BPEX/British pig health scheme (BPHS) recording system precludes recording of the worst carcasses in most plants as material is not usually presented from such carcasses on the normal slaughter line - it will not be dressed in the usual way and will be directed off the line into a detention or rectification area.