These are by far the most important endoparasites of the goat, the majority of which live in the stomach and gut (Fig 1), but also include lungworms that complete their life cycle in the respiratory tract.  A number of species are shared with cattle and sheep (important to bear in mind when devising a worm control programme if you have shared grazing).  They belong to the genera Ostertagia (Telodorsagia), Cooperia, Nematodirus, Oesophagostomum and Trichostrongylus and Haemonchus. 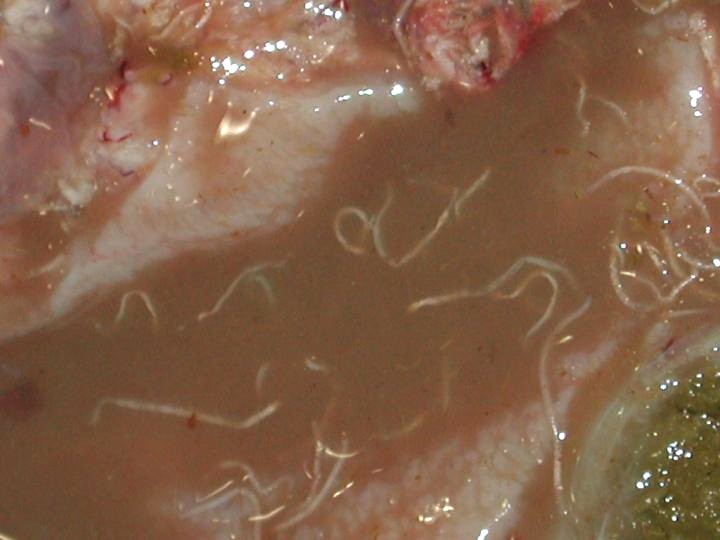 Fig 1:  Nematode worms in the gut of a goat at post mortem.

With the exception of Haemonchus the main presenting signs in a goat with gut roundworm infestation are diarrhoea and weight loss.  Haemonchus contortus (Barbers Pole worm) however spends most of its time in the 4th stomach (abomasum) where it sucks blood, resulting in anaemia (Fig 2) and weight loss, diarrhoea is not a feature - an important point to remember! 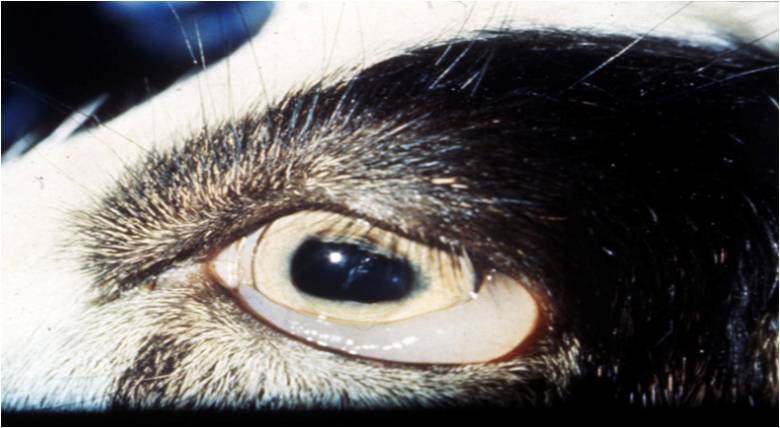 One of the reasons that nematodes are so important in goats is that unlike cattle and sheep, they have evolved in such a way that they produce very poor immunity on exposure, and thus remain susceptible to re-infection throughout their lives and worm control therefore remains a constant priority.

To fully understand the basics of worm control in goats, we have to appreciate the parasite life cycle. 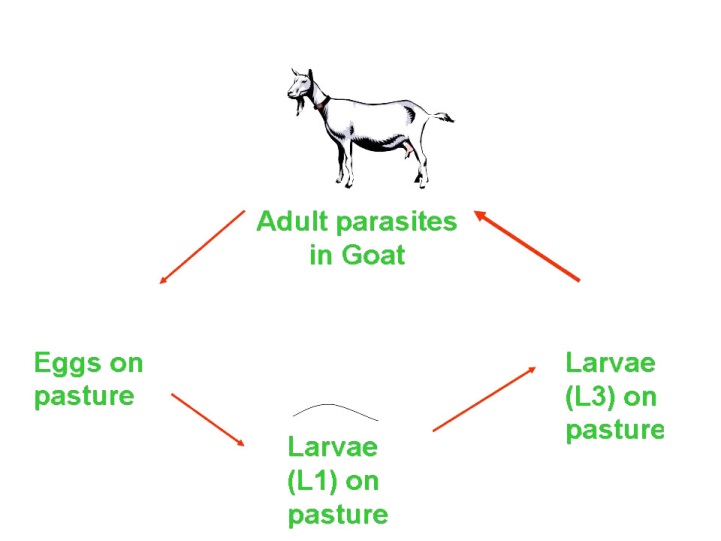 We know that it takes between 16 and 21 days after a goat has picked up infective larvae from the pasture, before worm eggs will appear in the faeces - this we can predict.  Far less predictable however is the time taken for the development of infective larvae (L3) that hatch from eggs passed in faeces on the pasture.  This will vary depending on a number of factors including weather conditions, with rapid development (as little as 2 weeks) in warm damp weather, and slow development (many weeks or even months) in hot dry or very cold weather.

It follows therefore that it is impossible for your vet to give you specific guidance as to when is the best time to worm your goats - or even if they need to be wormed at all?  It is for this reason that most large commercial goat units house their goats all year round - it keeps them away from pasture, and hence from the risk of developing a worm problem (Fig 3). 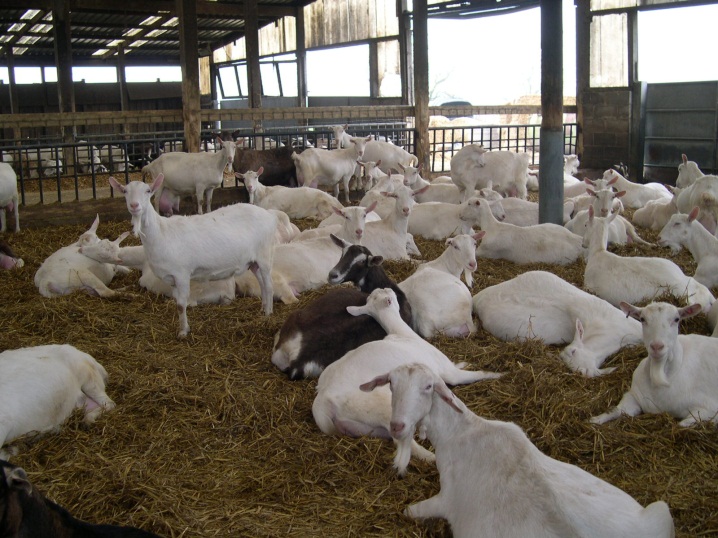 The concept of monitoring for worms in your goats is one to embrace - worming when they do not need to be wormed wastes your money and also encourages the development of wormer resistance.  You could wait until you see signs of diarrhoea / weight loss and then worm, but you run the risk of them developing severe gut damage if left untreated, and the diarrhoea and weight loss could be due to other causes such as fluke.

A relatively cost effective approach to monitoring your goats for worms is based on the examination of faeces samples, either individual samples, or pools of up to 10 faeces submitted to the laboratory as individual samples (then pooled in the laboratory).  The number of eggs counted gives an indication as to the weight of infection - and the likelihood that worming would be beneficial.  Discuss this approach with your vet, and in particular the interpretation of any results obtained.  There are do it yourself egg counting kits available, but you must only attempt this if you have been trained in how to undertake and interpret the results (Fig 4). 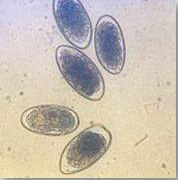 Fig 4:  Worm eggs under a microscope.

There are no wormers that are licensed for goats in the UK (i.e. have a marketing authorisation for use in the species) - and your vet will generally advise the use of a wormer licensed for use in other species (usually sheep), under a principle referred to as cascade.  Remember that there are essentially 3 groups of wormer to which the vast majority of currently available wormers belong these are the Benzimidazole Group, The Levamisole Group, Avermectin / Milbemycin Group.  There are also two relatively new products that are available only through your vet, and these should only be used where there is a known wormer resistance problem, these "new products" are "Zolvix (monepantel) and Startect (derquantel and abamectin). There is evidence to suggest that the Benzimidazole, Avermectin and Milbemycin Groups require a doubling of the sheep dose (in mg/kg), with around 1.5 times the sheep dose (in mg/kg) for Levamisole - although particular care must be taken not to overdose with this product as it can be toxic.  Goats are heavier than they look, so always ensure you dose to an accurate goat weight, dose to the heaviest in the group (not the average weight), and get your calculations correct and finally make sure your dosing equipment delivers the correct dose.  Any factor that leads to underdosing can lead to wormer resistance.

If you suspect that your wormer is not working, ask your vet to test for wormer resistance.  Also ask your vet to prepare a wormer protocol as part of your goat health plan.  The on-line manual "Sustainable Control of Parasites in Sheep - SCOPS" gives further information, much of which is very relevant to goat owners.

Also discuss with your vet how to ensure that you don't bring in resistant worms to your premises when you buy goats, or have new goats arriving and mixing with your own goats for whatever reason.  Such an approach should be based on the currently available principles for sheep described in the SCOPS manual.  Remember it is not the goat that becomes resistant to the wormer, but the worm burden it may be carrying - hence the need to ensure that a resistant burden is not deposited on your pasture - thus becoming available to your goats.  Such an approach is referred to as "quarantine dosing."

These are segmented flat (and often very long worms) that may live in the gut of your goat; the main species in the UK is Moniezia.  Unlike nematode worms in which worm eggs and most larvae in faeces are invisible to the naked eye, large tapeworm segments, (literally fragments that break off the end of the tapeworm) can appear in the faeces (often wriggling) and be a real cause for concern (Fig 5).  Although unpleasant to see, the worms in the gut actually cause very little if any harm to your goat! 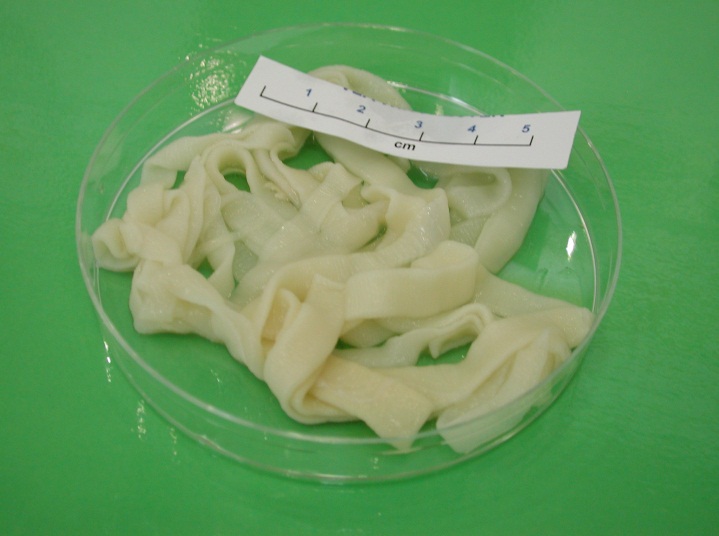 Fig 5:  A Moniezia tapeworm, fragments may break off and be found in faeces.

This endoparasite disease of the liver is not common, but when present on a farm can cause severe illness and death.  Its life cycle is long (8 - 12 weeks to complete), and involves a small mud snail (Fig 6) measuring only 2 - 3 mm in length (Galba truncatula), through which the free-living developmental stage of the parasite must pass to complete the life cycle.  It follows therefore that the condition only appears on those premises with wet/moist  where the snail can survive - this could for example be the margins of a pond/streamstream, or even a leaking water trough. 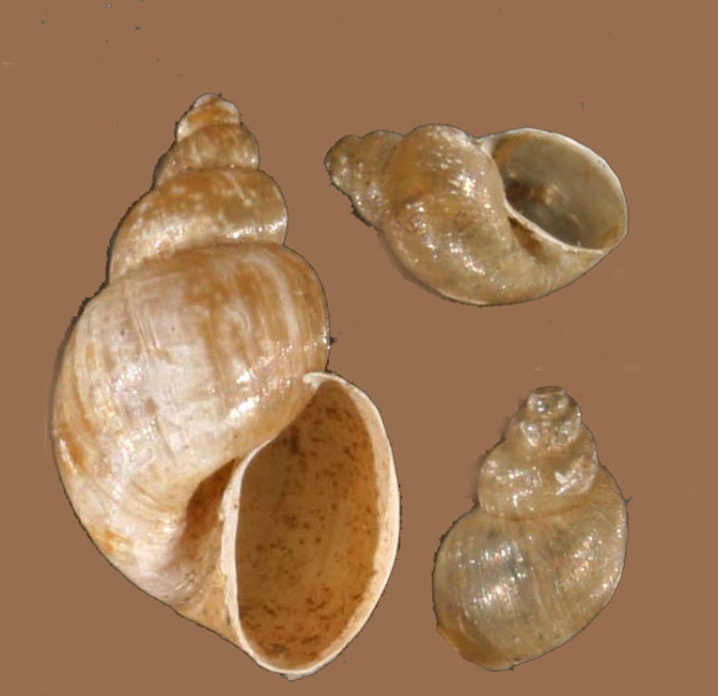 In acute fluke goats may simply be found dead as the immature parasite literally bores its way in through the liver capsule, causing haemorrhage as it does so, profound anaemia is a feature of survivors.  Goats that survive this initial insult will lose weight, develop diarrhoea, and often develop a fluid filled swelling under the jaw (so called "bottle jaw"), as the
mature fluke become established in the gall bladder (Fig 7) and bile ducts causing liver dysfunction.  Control is based on identifying wet potential snail habitats on the farm and avoiding them, and on farms with a known annual problem - using a strategic flukicide control programme.  There are no licensed flukicides available for goats in the UK - consult your vet on the best approach. 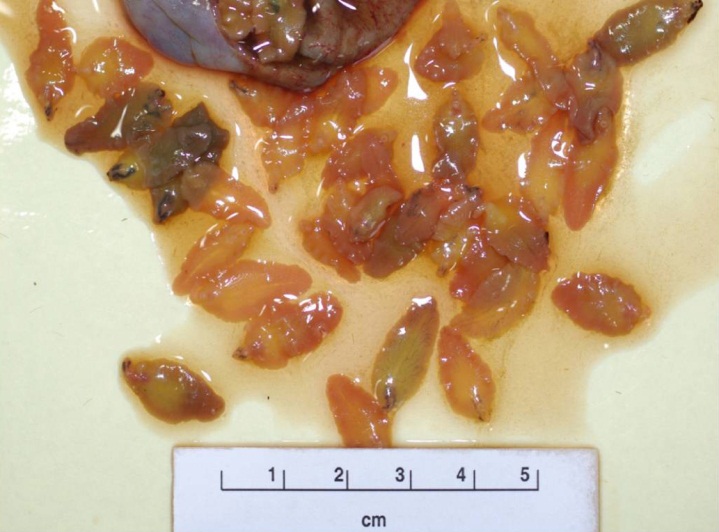 Fig 7:  Fluke in the gall bladder of a goat at post mortem.

These are small single celled protozoal parasites that multiply in the wall of the gut, and can cause severe gut damage as a result.  Coccidiosis is caused by a parasite referred to as Eimeria, and we recognise nine different species of Eimeria in the UK, only two of which are capable of causing severe disease namely E. ninakohlyakimovae and E. caprina. Other species cause no illness at all, or only mild signs - specialist tests can be used to differentiate the Eimeria burden; relying merely on a total count can be misleading.  With protozoal diseases such as coccidiosis and cryptosporidia we refer to the  "egg" appearing in faeces as an oocyst - a very resistant protozoal cystic form that can quickly contaminate the environment.

Infection is most commonly seen in young growing kids, particularly if intensively reared.  The parasite has a massive multiplication potential, it is estimated for example that for every single oocyst that is ingested, up to 1 million can be excreted.  Clinical signs can vary from sudden onset with blood and mucous stained diarrhoea, straining to pass faeces and abdominal pain in acute cases, to weight loss and pasty diarrhoea in more chronic cases (Fig 8). 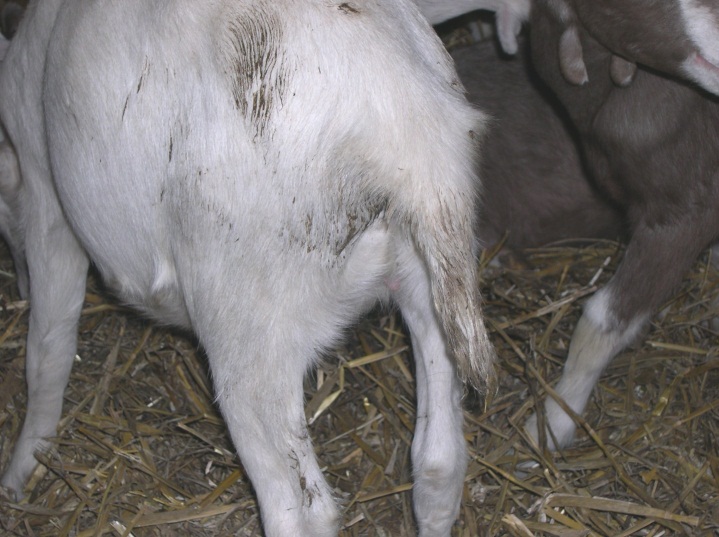 Control is based on attention to hygiene, specifically not allowing infection to build up in young stock pens (faecal build up encourages parasite build up with progressively heavier challenges to youngsters in continual throughput systems).  No products are licensed for use in goats, but your veterinary surgeon may advise the use of products licensed for use in sheep as anti-coccidials.

Another protozoan parasite (similar to Coccidia) that can affect very young kids causing diarrhoea (Fig 9), which if severe can be fatal, the same parasite can cause similar signs in both calves and lambs - so be careful not to let it spread between the species if confirmed.  It is more commonly seen in kids that have not taken sufficient colostrum (and are immunocompromised), in kids where early artificial milk feeding is faulty or erratic, and as a result of dirty feeding utensils or moving young kids into a faecally soiled environment. 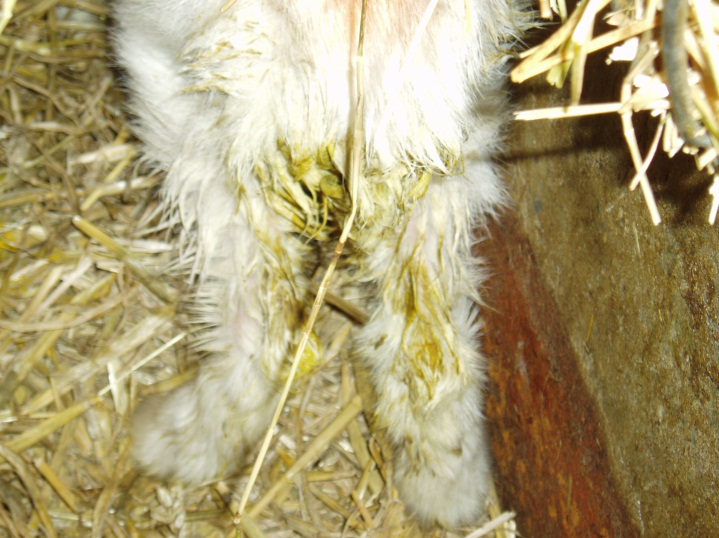 There is a specific anti-cryptosporidial product available that your vet may advise in a severely ill kid (although not licensed for use in goats), but treatment is usually symptomatic, keeping kids warm and dry, and ensuring they get sufficient fluids.