Yolk sac infection is a bacterial infection of the yolk sac. The yolk sac provides vital nutrients and antibodies to the birds during incubation and the first few days of life. Unfortunately, it is also a good breeding ground for bacteria.

The yolk sac can become infected at several stages, from pre-setting, through to incubation and transport to placement. Several bacteria may be involved but the most common is E Coli. Chicks most commonly affected are up to seven days old, with a high mortality rate usually around 3-4 days of age. Prevention is vital including management on the laying field, the hatchery, at transfer and in the brooders.

Birds affected with yolk sac infection will appear depressed and dejected with possibly a swollen abdomen. The chicks will be huddled together and may show a loss of appetite and diarrhoea.

A post mortem will typically find an enlarged and congested yolk sac - often foul smelling with watery contents. (Fig 1) The abnormality of the yolk sac contents varies depending on the type of bacteria involved. The skin on the abdomen of the chick can be discoloured a blue/green colour and the carcases go off very quickly - 'mushy chick disease'. You can also see unhealed navels on the surface of the chicks' abdomens in some cases. 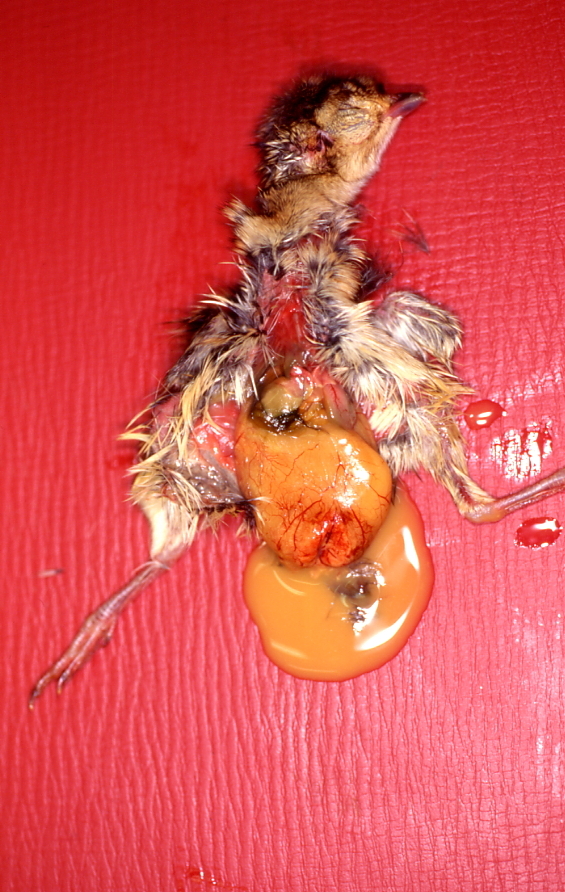 A presumptive diagnosis can be made based on the age of the chick and typical lesions. A categorical diagnosis is given by isolation and identification of the bacteria involved. When this is known, some antibiotics may be recommended, but these are often unsuccessful. The bacteria causing the disease can also be tested against different types of antibiotics to see which ones will be effective but this takes time and is more useful to decide on treatment in subsequent batches of chicks when there is a continuing problem.

Antibiotics may be beneficial in the acute stages; however the prognosis for chicks showing the obvious signs of yolk sac infection is poor and many will die before 7 days.

Therefore, prevention is crucial in controlling yolk sac infection. Prevention is based on a good programme of hygiene and sanitation. Good husbandry and hatchery management are pivotal here, including routine sanitation and good biosecurity measures in place, as well as practices such as regular cleaning, excluding severely soiled eggs from the hatchery and cleaning and frequently collecting eggs.