Neosporosis probably causes over 10% of all abortions in UK cattle

Neosporosis is caused by infection with the protozoa Neospora caninum. Neosporahas been found world-wide and in many species other than cattle. Currently abortion due to Neospora has been shown in cattle, sheep and horses. The dog and other canids (such as foxes) are the definitive host. That is they are the animals in which the parasite becomes sexually mature and reproduces. 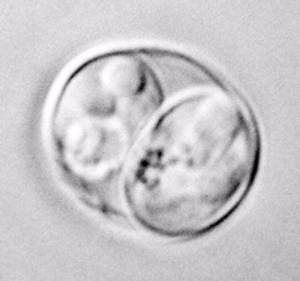 However, as a large number of healthy calves can be infected with Neospora it is important to eliminate other causes of abortion, particularly BVD or leptospirosis before a diagnosis of neosporosis is made.

Dogs are potentially a source of disease. So prevention must include:

a) Keeping cattle food and water away from dogs and foxes

b) High hygiene standards at calving. Dispose of placental membranes and aborted or dead calves before dogs can get them

2) Select only seronegative cattle for breeding. If you don;t cull seropositive cows, ensure that you only breed them to beef bulls.  Heifers with antibodies should be sold for meat not bred.

These strategies look expensive to achieve, however the cost of neosporosis far outweighs the cost of eliminating it from the herd