Part 3 : Benefits of treatment at the herd or group level

Management of fertility: Benefits of treatment at the herd or group level

The individual examination and treatment of cows that have not been seen in heat despite being eligible for mating can significantly improve reproductive performance. However, waiting until a problem has occurred and being diagnosed means that time has been lost.

If the main problem is one of missed heats due to either cows failing to show heat properly or because heat detection is not picking up cows showing heat, then treatment strategies (synchronisation) at a herd or group level can improve reproductive performance by getting more cows inseminated earlier. 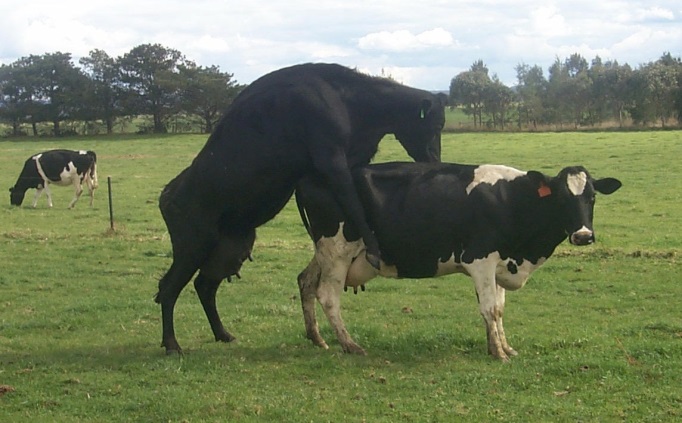 Figure 1: Detecting cows in heat is a crucial part of fertility management. Synchronising cows so that they come in heat or ovulate  at the same time can significantly improve reproductive performance if heat detection is less than optimal.

A variety of programmes are available but most are based on detecting heat after the prostaglandin injection with some programmes using fixed time AI (FTAI) at the end. An example programme is shown in Figure 2.

An alternative programme, which is less influenced by the stage of the heat cycle, is to use a progesterone device. This acts like a CL, so, in cows without a CL at the start of the programme removal acts fools the reproductive system into coming into heat. Combining a progesterone device with a PG injection means that cycling cows with and without a CL can be synchronised. The recommended programme is shown in Figure 3. As the synchronisation produced by this programme is better than an injection of PG alone, FTAI, either double FTAI at 48 and 72 hours after device removal or a single insemination at 56 hours, can be used earlier with a progesterone-based than a PG-based programme. Nevertheless, conception rates are better if cows are inseminated to observed heats.

Both progesterone and PG-based programmes work best when heat detection is used; this led to the development of programmes which were specifically designed to be used with FTAI and to avoid the need for heat detection. These GPG programmes are based around PG programmes; the two GnRH injections (the two G's in GPG) ensure that the PG injection is given to cows with a CL and also affect follicle development so that the timing of ovulation is tightly controlled, ensuring that the conception rate of a single FTAI 16 to 20 hours after the final GnRH is acceptable. The programme is summarised in Figure 4. 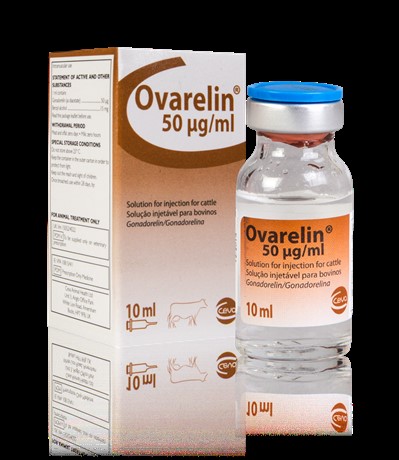 Figure 5: adding gonadotrophins (GnRH) to a synchronisation programme means that the timing of ovulation is controlled tightly enough to allow a fixed time AI to be used without heat detection.

This type of synchronisation programme does not work well in heifers - for synchronising heifers a progesterone or prostaglandin-based programme should be used.

The success of GPG programmes is not dependent on cows showing heat; they stimulate ovulation of the follicle (which is essential for the cow to get pregnant) rather than behavioural oestrus, so many treated cows will not show heat, but will still get pregnant to a fixed time AI.

What are the benefits of herd/group synchronisation programmes?

All the programmes discussed improve fertility by increasing the submission rate - i.e. cows get inseminated at a faster rate. However for a programme to work this needs to be translated into cows getting pregnant more quickly (reduced calving to conception interval). All synchronisation programmes reduce conception rates, as altering the oestrus cycle means that the follicle produced will be less fertile than one from a cow that has cycled and ovulated normally. This is particularly so for programmes using FTAI, as with those programmes submission rates approach 100%, with cattle that have not responded to treatment being inseminated; such cows will obviously have very low conception rates.

So the success of a synchronisation programme depends on whether the increase in submission rate outweighs the decrease in conception rates. For the programmes discussed earlier the reductions in conception rate can be as much as 10% when FTAI is used but are more usually around 3 to 5%. An example graph which compares an expected response to a GPG programme to an untreated group is shown in Figure 6. This is based on a conception rate of 30% in treated cows and 40% in untreated cows, an insemination rate of 100% after treatment, with an underlying 60% 3-week submission rate. 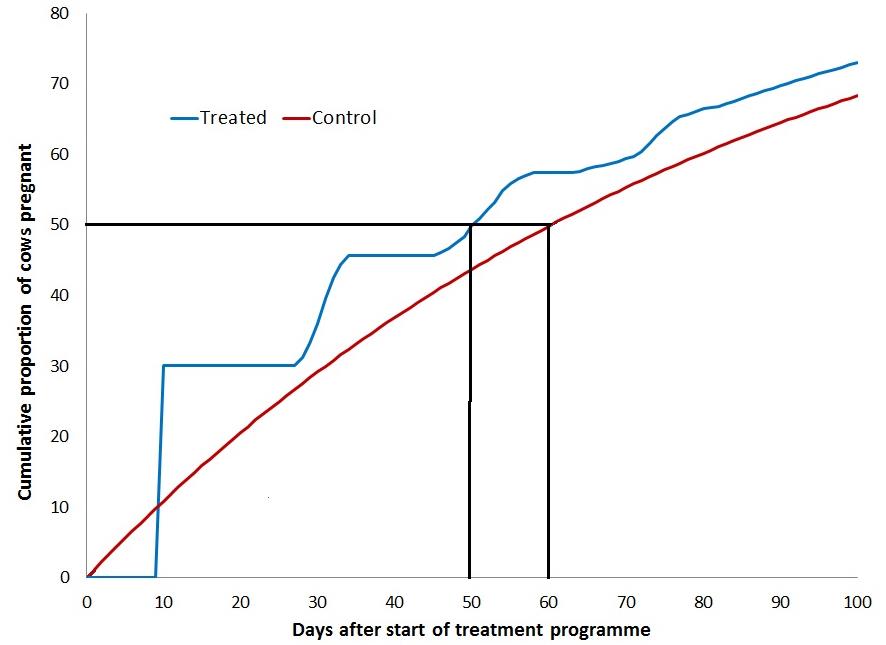 Figure 6: Comparison of the rate at which cows synchronised with a GPG programme (blue line)  get pregnant compared to a control group (red line). The difference between the medians (when 50% of cows get pregnant[black line]) determines the economic outcome of the treatment - in this case it is £18 per treated cow.

What influences the benefit of whole herd synchronisation? 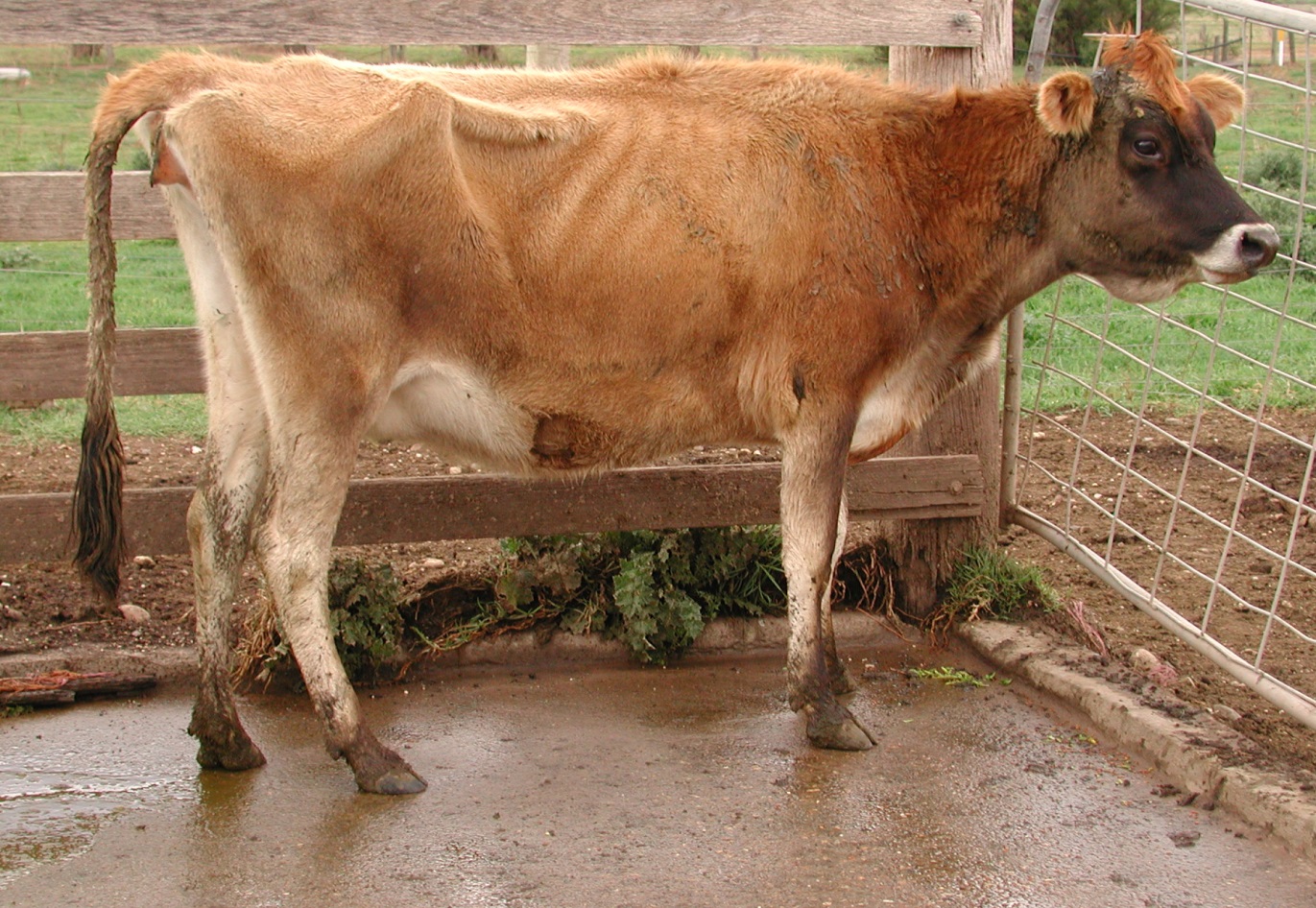 1) When you treat the cow

If treatment is given too late then the proportion of treated cows which get pregnant is lower, because there are fewer chances to serve the cows before they are culled. Costs of treatment are therefore spread over fewer pregnant cows. However, if the treatment is given too early the response to synchronisation is often poor - both more cows not responding and conception rates being poorer in responding cows.

This suggests that there is a 'sweet spot' where interval between calving and treatment is neither too long nor too short. Analysis of data from trials of GPG suggests that around 50 to 60 days is probably optimal. This is the time period when cows are approaching maximum fertility, so, as well as providing ample time for cows to get pregnant; it is also a period of time when response to synchronisation is likely to be near optimal. This is also during the first service window of 42-63 on most farms, highlighting the need to look at this on a herd level, rather than individual cows which won't be recognised as being a problem to spot bulling until later into their lactation.

This means that even if you have a good submission rate it shouldn't preclude you from thinking about synchronising cows on a group or herd basis, particularly in larger herds. An additional advantage of group synchronisation (which is not included in Figure 6) is that cows which don't conceive to FTAI are all likely to return to oestrus at the same time. Oestrus expression may therefore be better in those cows and labour can be concentrated on this task at the appropriate time.

Similar to submission rate, computer models often predict a simple response in terms of economic benefit of whole herd synchronisation, with herds with lower conception rates (CR) having lower benefits.  However data from GPG studies have shown that the association between return from whole herd synchronisation and conception rate of the herd can be negative, positive or absent.

The reason for these results is that the simple models don't take into account factors such as time from calving but also because they assume that submission and conception rate are independent. This is not the case as poor submission rate is often associated with poor conception rate, as farm staff who fail to detect heats are also more likely to wrongly record a cow as being in heat, so, as well as fewer cows being inseminated, fewer inseminated cows are capable of getting pregnant.

This association hides the links between conception or submission rate and return from synchronisation, because low submission rate (which tends to increase return) is associated with low pregnancy rate (which reduces return). So it is still best to ensure that if you are going to synchronise a group of cows that the expected conception rate if the cows were inseminated to observed oestrus is reasonable (>30%).

These can significantly affect response to synchronisation; for example cows with poor body condition score are much less likely to respond to synchronisation. Other factors such as history of disease can also be important. Returns are best when healthy cows are synchronised.

Care has to be taken when choosing to use synchronisation as a fertility aid. It is not a solution for poor management, in fact it works better in well managed herds which have reasonable but not optimal fertility.

Benefits other than reducing fertility costs

The benefits of synchronisation are not just seen in terms of better fertility. Reducing or eliminating the need for heat detection can save significant staff time as well as the costs of devices such as Kamars and Beacons. These benefits, on some farms, may be as important as the benefits in terms of fertility.

Synchronisation of large groups or whole herds of cattle can be an effective management tool, improving fertility and reducing the need for heat detection. However, it needs careful planning before it is used, as the benefits per cow tend to be relatively small so if the wrong groups of cows are chosen then costs can easily outweigh benefits.