This genetic disease of Holstein cattle was first reported in the year 2000 in Denmark after an investigation into an increasing number of calves that were born deformed.

Since the first report the condition has been reported in the Netherlands, the USA and the UK.

CVM is a genetic disease, which results in abnormal calves. It is a recessive condition, which means that both dam and sire must be a carrier of the CVM gene if the calves are to be affected. This also means that even if both parents are affected only ¼ of calves will be abnormal. So far the disease has been reported only in Holstein cattle, no other breeds have been shown to be affected. Bulls that have been identified as carriers include T Klassy, KOL Nixon, T Burma, Etazon Lord Lily and Carlin-M Ivanhoe Bell.

As the name suggestions the major effects of CVM are on the bones of the spine (vertebrae). The neck and /or the chest are shortened because of badly formed or fused vertebrae. The deformation often leads to a curved spine.

Other associated problems include abnormal ribs, contracted carpal joints, and contracted and rotated fetlocks. Heart defects, such as the major blood vessels being in the wrong place are seen in around 50% of cases.

Most calves are either aborted early or stillborn. Some do survive birth but die very soon after. 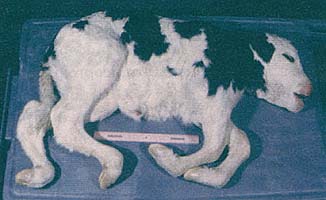