In basic terms the fertility efficiency of a beef suckler herd can be defined as achieving the maximum output (kg) of saleable beef per breeding cow per year (Fig 1).  Any factor that prevents a cow from conceiving, carrying a calf to term, delivering a live calf and rearing it successfully to weaning will therefore have an impact on herd fertility.

Fig 1: In basic terms the fertility efficiency of a beef suckler herd can be defined as achieving the maximum output (kg) of saleable beef per breeding cow per year

Many vets are experienced at analysing dairy herd fertility and do this as part of routine herd fertility visits using computer generated printouts which allow detailed analysis with little effort.  The situation in beef herds is completely different with few farmers and vets ever sitting down to discuss detailed fertility analysis.  One of the main reasons for this is that few farms have fertility data that can be easily produced in a useable format without considerable effort.  The data needed to carry out basic fertility analysis and benchmarking is not complex but without recording and analysing this data the farmer and vet cannot identify areas of loss and work to improve performance.

The minimum data that should be gathered for annual analysis is shown in Figure 2, and from this data you can calculate some key benchmark performance figures. 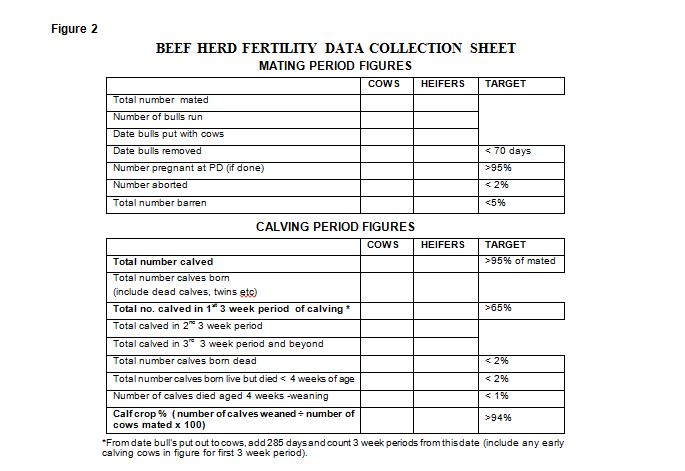 What are the key performance figures ?

Three benchmark figures that can be useful to highlight are :

This figure reflects overall herd fertility which is influenced by cow and bull factors and in a fertile herd a target of 95% females calving following a 9-10 week mating period should be the aim. In herds consistently getting > 5% barren cows there should be an investigation for potential causes of infertility which could be failure to conceive or abnormal pregnancy loss/abortion.  An analysis of the barren cows' information is useful eg. were they mostly young or old cows ? when did they calve in previous calving period ? and did they have bad calvings.

This is a useful benchmark figure to calculate as it reflects overall fertility efficiency of cows and bulls. Note when calculating this figure calculate day 1 of the calving period by adding 285 days onto the date the bulls were put in with cows.  Include all cows calved in the next 21 days plus any calved prior to the calculated start of calving (Figs 3-4).  If this figure is calculated form the date the first cow calves (which may be up to 10 days early with twin calvers etc) the benchmark figure will be inaccurate and not comparable within herds and years. Herds achieving this target will have fertile cyclic cows and fully fertile bulls (see bull fertility bulletin).  The higher the % of calves that are born in this period the higher the average weaning weight which will significantly boost herd output.

This is a useful figure to calculate as it reflects overall fertility output including calf mortality. Recent QMS survey data suggests the average calf crop % for Scottish suckler herds is between 85-90% with a wide range around this average. If the calf crop % is < 90% figures must be analysed to see where in the production cycle the losses are occurring ie. is it poor cow fertility or subsequent calf losses that are the problem.

Without farmer and vet analysing these figures together it is hard to target advice and efforts to maximise profits. It may be much easier to improve output by reducing areas of calf losses (eg dystocia and neonatal disease) than trying to push herd pregnancy rates up by a few %.

Figs 3 and 4: These calving histograms show the advantage of synchronisation when all cows are mated on day 1 of the breeding period  leading to a compact calving.

How to achieve targets for beef herd fertility

To achieve these targets it is important to pro-actively manage the herd to ensure all areas of potential fertility inefficiency are being addressed.  In the rest of this bulletin and in bulletin 2 we will consider the main areas that need managed to ensure success.

After calving it is normal for cows to have a period of anoestrus (acyclicity) when the ovaries are inactive.  In beef cows the 2 main factors which influence the length of the anoestrus period are suckling by the calf (Fig 5), and body condition at calving. Calf suckling inhibits the release of hormones in the brain which stimulate the ovaries to become active again after calving. As calves get older and suckle less frequently this effect wanes and the ovaries become active.  Restricted access suckling and calf separation has been shown to significantly reduce the post calving anoestrus period in beef cows however it is impractical for most farms to manage this even for short periods so is a tool unlikely to be used by farmers. 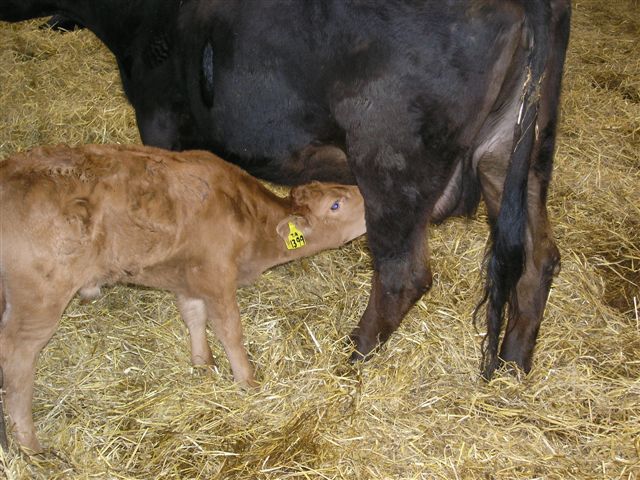 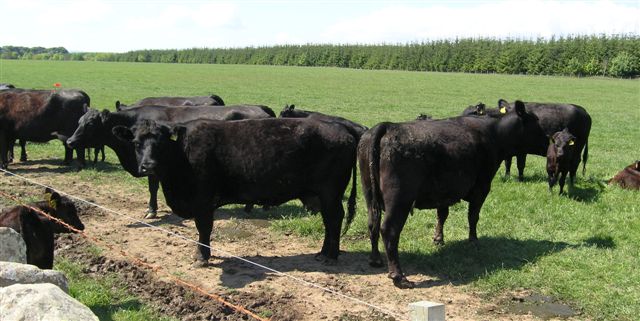 Fig 6: Spring calving cows calved in BCS 2.5-3 will resume cyclicity within 50-60 days in most cases.

On average, a beef suckler cow calving in moderate to good BCS will have an anoestrus period of 50-60 days (Fig 6).  Thin cows, especially 1st calvers which are still trying to grow and suckle their first calf will be at risk of having anoestrus periods of 70 days or more (Fig 7).  The effect of prolonged anoestrus in a restricted mating period of 9-10 weeks is shown in Figure 8 (below). 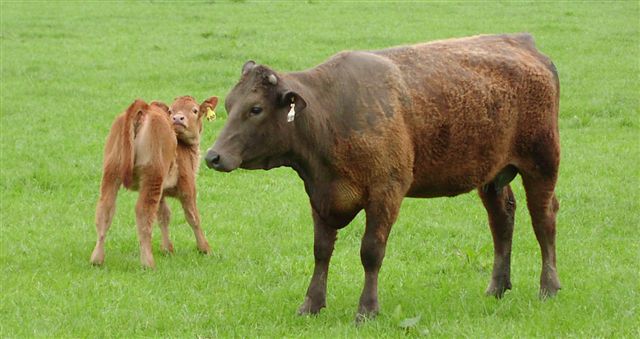 Fig 7: First calvers are at high risk of extended anoestrus if calved in poor body condition and not managed well. 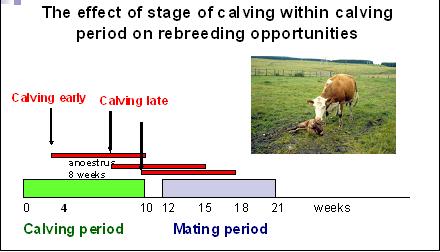 What this diagram shows is how a normal anoestrus period of 8 weeks (56 days) influences the cows opportunities to get re-bred.  Cows that calve in the first month of calving, if in good BCS are highly likely to be cyclic by the time the bulls go out and thus have 3 or more chances of having a fertile heat during the mating period. This is another reason why the target of 65% or more calving in 1st 3 weeks is a key figure.  Herds that achieve this have the best chance of cows rebreeding plus wean heavier calves.

Thin cows, even if they calve in month 1 of calving period are unlikely to start cycling until after the bulls are in.  Worse still, thin cows that calve late in the calving period may only start cycling in the last few weeks of the mating period meaning they are at risk of ending up barren.  If you have a lot of barren 1st calvers at PD it is quite possible that this is simply down to extended anoestrus - they can't get pregnant if they are not cycling when the bulls are in!  Obviously having extended mating periods where bulls are run for 5-6 months will solve this problem but lead to inefficient herd management due to extended calving periods.

What about trace element deficiency ?

The 'quick fix' for infertility is often to buy expensive mineral/vitamin supplements or blame some obscure dietary deficiency. The fact is that most cows on a properly planned winter diet with general purpose mineral/vitamin supplement will be unlikely to have any deficiencies severe enough to influence fertility.  If a farm has a history of severe deficiency in copper, selenium or iodine in grazing animals then it is clearly sensible to address this especially in bulling heifers which are most likely to be affected.  Most infertility related to diet is down to extended anoestrus due to poor planning of pre-calving diets or grassland management.

The next critical area to manage to ensure good fertility is integration of replacement heifers and this is dealt with in the next bulletin. 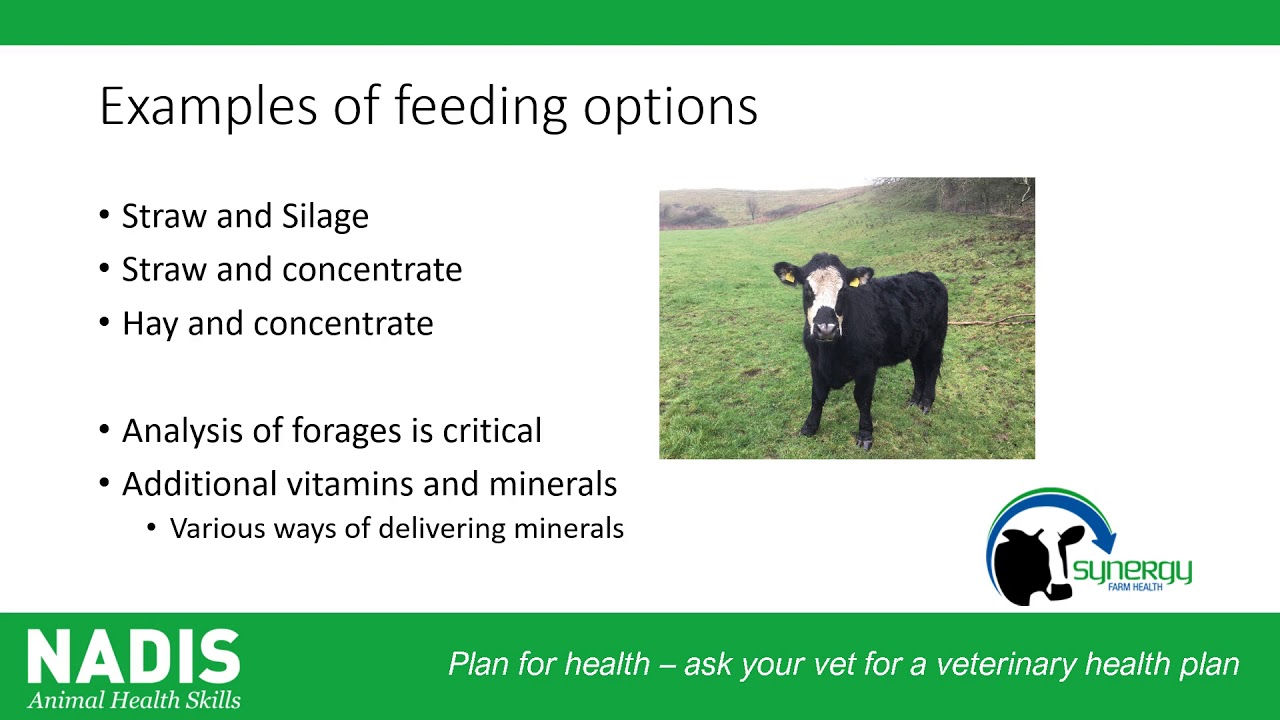