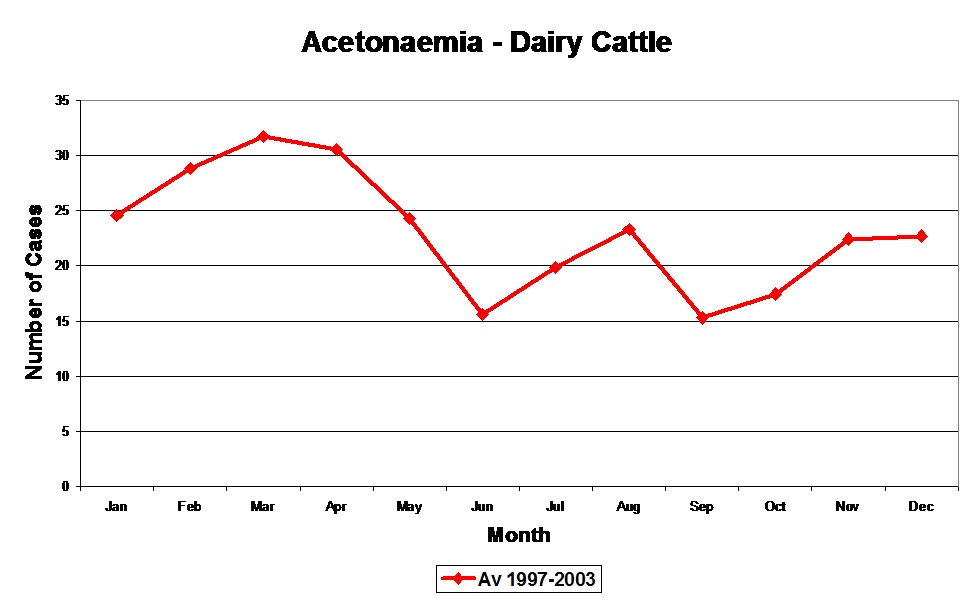 Like most metabolic diseases it is important to remember that for every cow that shows clinical signs, there will be several more which are affected sub-clinically.

Acetonaemia occurs when the cow's energy intake does not match its requirement and the cow is unable to compensate and mobilises its body reserves too quickly. In the beef cow, this is most likely to occur in late pregnancy when the cow's appetite is at its lowest and the energy requirement of the growing calf near its peak. In the dairy cow, the mismatch between input and output usually occurs in the first few weeks of lactation, because the cow is not able to eat enough to match the energy lost in the milk.

Acetonaemia is more common in the dairy cow, probably because the energy difference of the lactating cow is more difficult to overcome than that of the pregnant cow, which means that most dairy cows in the UK are in negative energy balance during the first few weeks of lactation. Acetonaemia occurs when the cow is not able to cope with this energy deficit, either because it is too great or if it continues for too long.

If it occurs in one cow, it usually indicates that although the other cows in the herd are currently compensating, many are suffering from an energy deficit that is significantly reducing their productivity. A clinical case of acetonaemia is the tip of the iceberg, and therefore it is advisable to discuss blood testing other cows in the same lactation group, for the subclinical form of the disease.

Each treated cow is the tip of the iceberg, so prevention is very important. The aim of any prevention regime is to maximise dry matter intake during the critical period. This can be achieved by:

Aim to calve cows at condition score (CS) 3.0. Fat cows have lower appetites and mobilise more fat and so are more prone to ketosis.

Introduce the milking ration to the dry cows from two weeks before calving. This allows the rumen time to adapt to the milking diet. Maximise palatability. Good quality forage and feeding as a total mixed ration both increase intake and thus reduce the energy deficit Maximise feeding time. Increasing the feeder space, particularly for self-fed silage, can increase intake and thus reduce energy deficit. Keep the diet consistent. Avoid sudden changes to the diet even if only batch changes of concentrate

4) Reduce stress  If possible keep freshly-calved cows separate from the milking herd for at least two weeks after calving.  Acetonaemia is a significant cause of economic loss, but these losses can be reduced by good management and attention to detail.

5) Early treatment leads to early recovery, so treat as soon as possible

Veterinary advice should be sought to ensure that displaced abomasum is ruled out as a cause of the acetonaemia.